After the Gang Gang sighting, we continued to wind our way gently back down into Jindabyne. After a quick shower, we hoofed it off to the pub for some dinner. Being Christmas eve, we weren't expecting them to offer much other than standard pub-grub. Which didnt fuss us. We were aiming to keep things simple, and as a back up plan had packed the esky (cooler) with a sufficiency of comestibles in contingency*.

Lo! We were pleasantly surprised to find the pub doing a rather brisk trade, with a full menu on offer. Bonus! Details of the meal itself are sketchy (The Most DH had prawns, and I a rare rump steak), but also irrelavant...

It was very interesting to look around the dining room, and attempt to discern everyones story. A few tables were obviously visiting family, just gathering for a dinner out. Other tables seemed to be occupied by overseas travellers. A few tables may just have been people giving up the road for the day, to push on fresh tommorrow for thier final destinations. To me, it felt a bit like we were all Christmas Refugees, one way or another. I so dislike Christmas.

But we did enjoy ourselves. Had a walk down to the shore of Lake Jindabyne. Then back to the pub for some 'afters'. Eventually ending up back in the room, where we admitted to each other that we had both mistaken 'spa bath' for a 'hot tub'. The latter being what we were imagining when we booked the room.

But we did enjoy ourselves!

In the morning, we were up before the sun. From the balcony we sipped some instant coffee (ptfftt!) while watching this young Galah give his parent some cheek. 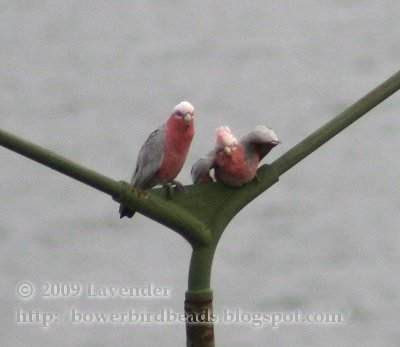 Labels: 4WD, absurdities, Australia, birds in the backyard, Make your own Fun, OTR (on the road), writing

enjoyed reading this, you must have had a great time. I would love to do something like this at Christmas. I actually detest christmas but have to do it for my family...or feel like I should.

really enjoying reading about this.

i'll have to post a pic of my view when I get a chance, i'll put it on my bird blog.

Sandy Thank you Sandy, I was wondering how it would go over - so many words, so few pics LOL Thank You!
We did have a good time, I think we really needed a 'real' overnite getaway, and it was our first chistmas together on our own, so I was really enjoying being free of the usual grind - you know what I mean! I think the family is the only reason many of us still go through the motions, pity families arent always as open to a bit of change as we are - but surely someday they will be LOL
I look forward to the pics of your view, and bet they are magnificent!

You were one of the smart ones at christmas. Argh I wont bore you again with my veiw on it. When my kids are old enough for me to just deposit the "boxing day" money into their accounts I will be partaking in some xmas refugeeing too. I am intrigued as to what the galahs were sitting on. Is it a palm? it looks plastic. The more I look at it the less I can figure it out

lavender, something feels special about this christmas eve and the way you describe it.

LOL! Guess the "Spa" will end up at Oculus Sinister, would'nt it. Happy you enjoyed yourself anyway. Nothing worse than letting spoil a holiday with bad mood because of stupid but dispensable things.
Great shot of the Galah chick. He is begging for food, isn't he? Otherwise you could not tell apart who is the parent, he is well grown already. My guess: They are sitting on a street lamp.

I LOVE LOVE LOVE Christmas!
So, are you ever going to explain why you hate it so much? I mean, is there a story there?

Melanie They are sitting on one of those light poles mounted on a median, and send a light out over both sides of the street, I thought about putting the whole photo up to avoid that very confusion, but then the birs would have been too small to see....isnt that chick being a clown? LOL

KJ Oh KJ, I was SO GLAD to be having a QUIET christmas without the usual suspects (wink wink). And being away somewhere together for the first time in 10 years (without it involving a hospital stay LOL!) made it very special indeed :)

Areeiro LOL yes he is begging for food! And he was being very noisy about it too LOL His sibling wasnt being such a clown, but maybe he had just been fed?! LOL Pity they were so far off, Id have loved a better shot :)

BetteJo Teeheehee Well, its really a long story involving many things, but the short version is: When you migrate to another country, only one of you has in-laws to put up with LOL :)