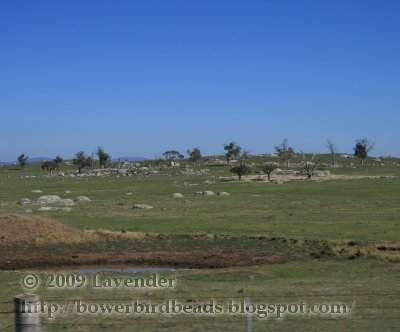 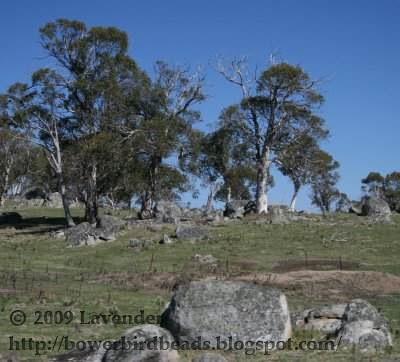 This length of the Snowy Mountains Highway is fairly flat and very boulder-strewn. But the horizon tells us another climb is ahead before we escape the Great Dividing Range. 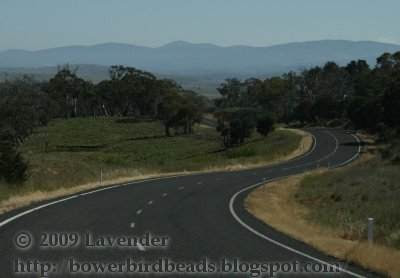 After a few short hours, we find ourselves in Adaminaby, and here at thier Big Trout we found a lovely place to set up the camp stove. A sign at the base of the trout reads that it was erected in 2007 to mark the 50th anniversary of the moving of the town of Adaminaby. 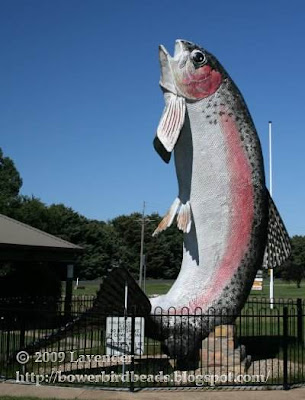 Seems Old Adaminaby was in the way of the new Lake Eucumbene, which was formed as part of the Snowy Mountains Hydro-electric scheme.

Now the new town does a fair trade with trout fishermen during the summer, and the ski set all winter. Locals told us that with the drought of the last few years, the water level is low enough that you can still see the old town. Can you imagine it? We would have gone to see ourselves, but time urged us onwards.
Posted by Lavender at 5:08 AM

What's with us Aussies? The big banana, prawn, sheep, lobster and now I've seen it all...trout :)

(I'm sure there are many more I've missed)

Oh Young Werther you forgot the Big worm, the big cow, the big chair, the big pinapple lol sorry, couldnt help myself. I went into tourist mode then. The big sheep?

Wow! who caught that gigantic trout?!

The trout reminds me of the U.S. - God knows we have our share of giant roadside attractions, a giant chicken comes to mind.

YW Somewhere I have a shot of The Big Potato from Robertson, ROFL Not lying!!!


Melanie Somwehere else I have a shot of The Big Merino from Goulburn, ROFL Is that the one you mean? LOL

BetteJo Oh Thank Heavens its NOT just Australia LOL Its a bit of madness here, it must be the heat gets to people LOL

LOL! The trout is brilliant! I'd be really proud t o have that as the symbol of my city ;-). Can't imagine the old town is under water now. This is so special and freaky at the same time. Such a shame you did not have time to have a look at it. I'd be so curious to see that.

Areeiro It was pretty special, the silvery bits were actually silvery too - hard to tell in this photo tho, thats OK cause its a good all over view.
Yes! I think it would fun and freaky to see the old town - I can imagine it and wonder how my imagination compares LOL

I'm enjoying the photos of this area.