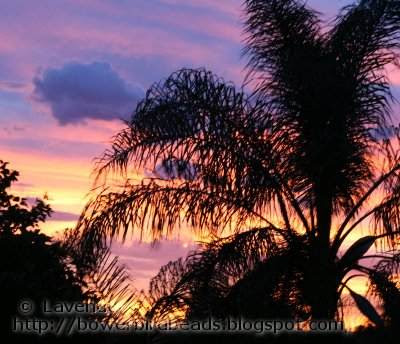 I remember that evening. I was cooking dinner when I noticed how colourful the sunset was, and dashed out with the camera for a couple quick ones. The only thing that brought me back to reality was the smoke alarm going off. Dinner was charcoal, so we had a pizza delivered instead.

The colours of this shot are just as they appeared. I cant say Ive seen such a magnificent sunset - before or since!

~ ~ ~ DELETED CONTENT WAS HERE: ~ ~ ~
Synopsis: Rant on digital manipulation and mis-representation of images as technically brilliant, but actually - in reality - fake! If its photoshopped, it shouldn't be presented as though it were not, and what ever happened to learning how to take a proper picture in the first place?
Posted by Lavender at 5:02 AM

oh but but I love photoshop and looking at other peoples editing genius:)my photoshopping is blatantly obvious though but yes you are dead right, if people manipulate and claim not too that is fake and not cool. Hey your pic is like those ones you see on the nature posters, awesome. Very tropical and conjures up visions of far off exotic islands.