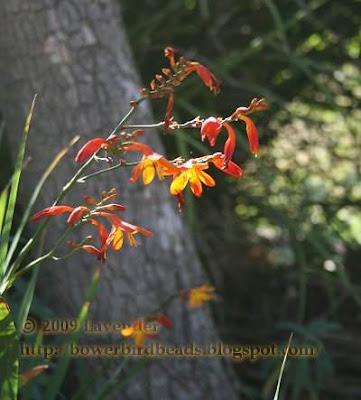 I suspect they are becoming an invasive weed here around Sydney, as I have begun to see them all along roadsides in numbers which suggest a gathering of troops.

In addition to thier bullying tactics with other plants around my garden, the flowers have changed from a lucious deep solid red, to this sort of red-ish and orange affair, which are pretty enough - I admitt! But not the glorious red that won me over. Most likely the colour change indicates that these were a hybrid, which now is reverting to one of its parents types - and 'showing thier true colours' so to speak.

I will most likely be eliminating these after flowering this season, so lets enjoy them now. 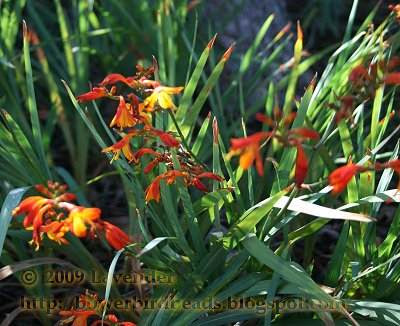 This plant is one of the most requested here in Ontario Canada, but I constantly hear the same people back two or three years later complaining about its size and how the blooms have diminished in one way or another.... but there are more and more hybrids appearing on the scene year in, year out.

Oh I like it! Of course it's not trying to take over MY garden. But I prefer the orange and yellow to red any day, purely personal taste. On the other hand - nobody likes a bully. :)

I love these, they add a 'tropical' look to an English garden. We have both the red (which is slightly taller) and the orange too. They will spread, but are easily contained as they are easy to pull up and keep in tight patches. The bulbs, or are they corms do get onto the compost heap and become transplanted across the garden. Although we have both colours, the red ones have stayed red for at least 20 years. The leaves are really useful as they are great twisted into cordage to be used for tying up other plants. I've even made it into 1/2 inch rope which is very strong and lasts for years...