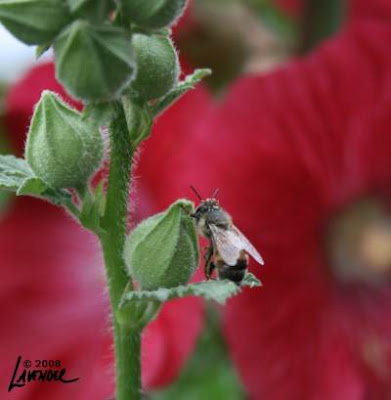 After visiting several flowers, our man on the job was fluffy with pollen. When he finally stumbled out of the last flower, he flew listing to one side.

Now probably it was all that pollen stuck to him that set him off balance. Or maybe he was just so full of nectar that the weight of it made it hard to maintain altitude. Id have to be a bee to be sure. But I find it more amusing to think that he was just tipsy with all that sweet nectar.

And he certinally flew like a drunk. Suddenly changing course, shambling forward in a sort of sideways fashion and then - he bumped into this bud stalk! Instantly, but not gracefully, he grasped a bud with two legs and hauled his body in to sit on the edge of this leaf!

Then he set about furiously running his legs over himself. Everywhere he could reach he tried to clear himself of pollen. Pollen is obviously sticky stuff.

Suddenly deciding he was 'clear for take off', he let go of the bud and plunged several inches downward untill he got his wings going fast enough for flight. And with pollen grains still visible on his head, our bee friend flew off toward home. Flew...well, okay. Not so much 'flew' as lurched.

Oh that's too funny! I like the tipsy theory too - so much more colorful!

This post is great! I love to think of the drunk bee hauling himself to the next flower. He reminds me of a kid in a candy story stuffing their pockets overflowing.

:-) I'd love to see something like that myself. Might well be that the sugar level in little bees haemolymph exceeded the non-tipsy range. LOL

Looks like a poppy... you're not growing poppies are you ;)

Hey young werther, this is no poppy. To me it's a hollyhock (Alcea rosea). Correct me Lavender?

BetteJo LOL Youve got to make your own fun - but of course, it could all be true too! Teeheehee

flowergardengirlcom
A candy store! Thats fun to imagine too! And very apt when a bee is stuffing pollen into his leg pouches! LOL

areeiro Well, next spring you will be doing a tonne of bee watching, you will get to see lots of interesting behaviour - I look forward to hearing about it!
And...
Yes you are right, it is a hollyhock - Young Werther is making a joke - although I do often grow poppies - sometimes suspicious ones! (But just for the flowers!) :)

Young Werther Poppies?
Sir, do I look like a Pharmacist?
Harumpf!

(Meet me behind the shed in 10 minutes)