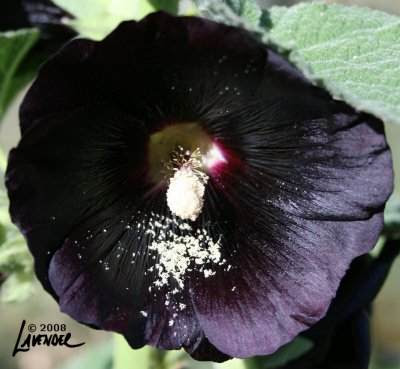 Ive had a small victory this week. Blooming in my garden for the first time is the infamous black hollyhock, Alcea Rosea var Nigra. Also known as The Black Knight. My excitement stems from having sown seeds for this variety twice before, with only terrible germination rates followed by snail attack as my reward.

OMG that is GORGEOUS !

It's great! Congratulations! I bet you were fighting the snails hard for this one :-D. I love dark flowers. I don't have a garden unfortunately, my balcony is not big enough for hollyhocks. :-) But I grow morning glories (Ipomoea). I'll put a pic on my blog today. They are similar in size and splender of the flowers and I got seeds of one that is called "Black Knight" and also has black flowers. Will try to grow it next year. Fingers crossed!

Melanie Its so dark, isnt it? Its actually a super dark red - but unless its backlit, you could never tell!

areeiro I used to have a balcony garden, and another time a fire escape garden - we dedicated gardeners dont let a thing like no garden stop us, do we? LOL
A black morning glory? Wow, that will be really special - I look forward to it!

BetteJo Teeheehee no way for Mr Bee to avoid doing his job...if only all jobs were so easy, eh?

That is a very dramatic flower Lavender.

Ces Thank you Ces! Im so enamoured of them :)