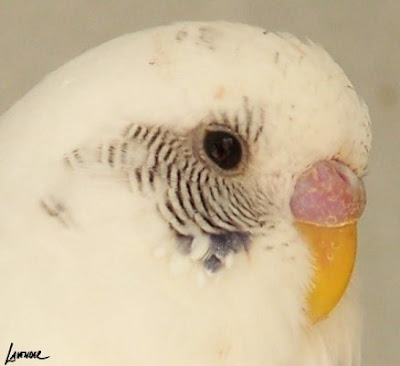 Primo joined the flock just this last May, when we found him at a flea market of all places! I didnt need another bird, but Id coveted a Violet Recessive Pied, and he was so charming and healthy. It was love at first sight!

Its hard for a new bird to find his place in an established colony. Lucky for Primo, Georgous George was thrilled to have another mostly white pied bird to talk to, and they became friends instantly. Gorgeous George looked after Primo, and helped him smooze his way into the good books with the rest of the flock. Soon it was like he'd always been part of the group. 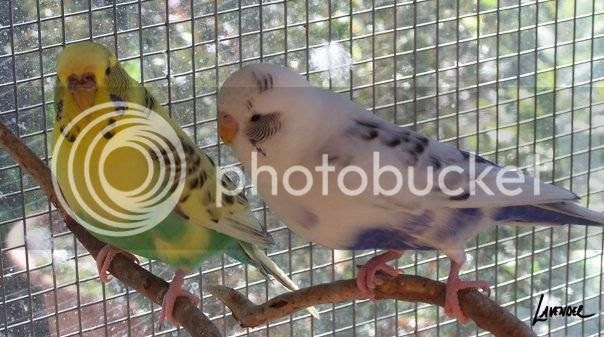 Primo is about a year and a half old, and like most of the other male budgies, rather fancies Uno. Here he is leaning in toward her, giving her his best sweet talk - and she is listening to him! What a floozy! I was waiting for Goliath to come along and chase him off. Lucky for Primo, a younger bird came along to see what they were up to, which rather spoiled the romantic mood.

Primo is no 'seed-junkie', he loves all fruits and veggies. If he could, he would never eat a seed again. But his most interesting quirk is that he likes to chew on a brick! He is a brick-eating budgie!

My birds have several choices in the aviary for keeping thier beak trim and providing minerals and grit. Besides cuttlefish, there is a sandstone block, shell grit, mineral blocks and oyster shells. But Primo likes the brick the best. It isnt in there to eat, its to block the clean out hole!

Now the other birds have seen him rounding off the corners of the brick, they all like to have a go. You can be sure when I am sucessful at getting shots of this, I will post them for you.

Have a Happy Budgie Sunday! 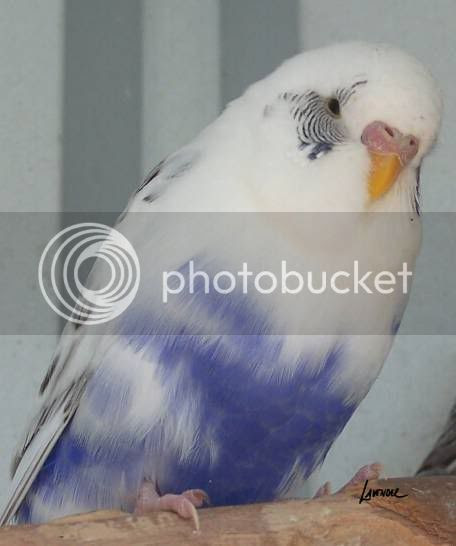 Primo has never bitten me, but I dare say I wont be in a rush to experience his 'bite force' LOL!

Thanks Snoskred! I couldnt resist him, although Im not sure I tried very hard LOL!

If Im not back by evening - SEND A RECON TEAM!!!

Beautiful birds! I'm guessing you have more than just a couple then? I don't think I realized you have an aviary. Pretty cool!

HAHAHHAHHAHAA while you are SUFFERING at the footy, I'm going to ask a rude question Lavender, does Primo shit like a brick too? HAHAHHAAAA You don't have to answer that ;)

BetteJo Yipper! I have um, gee, how many are there - hang on a sec......sixteen! Sixteen 'keeper' birds, and another eight that I am planning to re-home when they are ready - Like I said, I didnt need another bird Tehehe The aviary is a very bright place, and the birds are all fun characters!

Are you sure it's not just an escape attempt?!

Lavender I love your bird stories. You are a great storyteller.

I do not like to say this word - but if you put Primo in a brick sh-thouse, do you think he will eat it down?

I love the blue colors on birds.

I don't blame you for getting another bird but I am amazed at the culinary preparations!

Barkfoot Hahaha You could be onto something there Mate! Maybe he craves adventure...perhaps we should look at him to carry the camera - actually, that might be what I have to do to get a pic of his brick eating - and brick-eating demonstrations. They always fly back up to thier perches when they see me coming!


Ces Tehehe Yes, I think he could! Im glad the aviary is made of steel, or I could be birdless by now :)
Re: culinary preparations, Whenever I arrive at the aviary with thier 'salad du jour' I annouce my arrival by calling out:
"Fauna Catering!!"