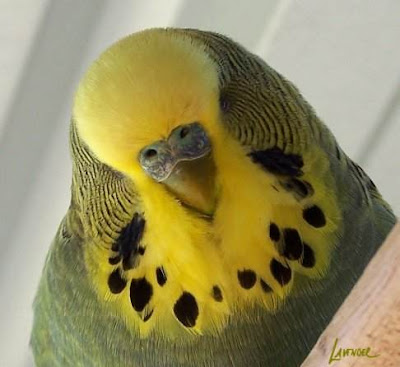 Goliath is a two year old yellow face blue budgerigar. He got his name from being the biggest and fastest growing chick in his clutch. His parents are Goldie and Freebird, and he is much bigger than both of them - together!

Goliath is madly in love with Uno, a recessive pied green hen who also has a yellow face. Theyve been a pair since April. In May they shared a nest and had five eggs, but none hatched. Being the first time for both of them, thats not unusual or worrysome. Better luck next time now they've had some practice.

Uno's been known to treat him rather harshly, and even for todays photos I saw her be cruel to him once. But watching them closely, in the main she seems to really enjoy his companionship. I sincerely hope she stops toying with his heart. Shes not the only eligible hen in the aviary, and his loyalty and attentiveness has not escaped the attention of other hens.

Goliath likes to be everywhere Uno is, and when he can't for whatever reason, rivals move in. (Yes, Gorgeous George is one of them!) This burly budgie sends them packing just by returning to Uno's side. The rivals may be foolish to try for her, but they are not stupid.

Besides Uno, Goliath loves fresh carrott and pumpkins. I suspect not so much for the beta carotene as the crunch.

Happy Budgie Sunday Everyone!
Posted by Lavender at 6:49 AM

Maybe Unos just testing Goliaths commitment, giving him a hard time to see if he is really in love.
Goliath is a monster bird, are you sure he's a budgie? There wasn't a mix up with the eggs? I hope you're not trying to fool us painting pidgeons again, is that a false beak? Yes, look, you can just see the elastic.....

Mark Antoney - He was very intently talking to her when I snapped this - it is very cute to watch!


Barkfoot - Oh Darn, youre onto me! I thought I photoshopped all the elastic out of the pic - tehehe.
Good one Mate! But I did wonder what sort of mutant budgie chick he was, before he fledged his folks had a very hard job keeping him fed :)

Oh I love the story! A high maintenance female - it crosses all species. Goliath, though he may be big and strong sheds light to the term "henpecked" Hahaha! That Uno better start being mellow, she may end up being a spinster!

I just noticed a recurring theme - color! Your blog is very colorful: subjects and stories both. Aside from birds and beads - you have beautiful flowers. You really LOVE animals and know them. Beautiful, colorful and very interesting posts. I enjoy my visits very much. Thank you.

Hey! how come my comments are posting right away? You still have that message on the comments box that they are being moderated? Did I just receive special a privilege? :-)

Hiya Ces, well, thats what Ive been telling Uno - she'd better wise up and stop playing the head games :) Hes too fine a catch to play like that hehehe

Thank you for your observation and sharing it with me, its much appreciated!

re comments, Im experimenting with doing the moderation after the fact - so far everyones been playing nice, so fingers crossed I can keep it this way!

Always lovely to see you Ces!

Goliath is well named. Uno needs to watch her step!

I think Uno just wants to keep Goliath in line. After all, you can't have a big old budgie like that running rampant without some moderation. Hopefully they will be blessed with some chicks soon.
http://www.paid-survey-success.com

Captain, Ta! Im with you, a deangerous game she plays.

BB, :) He is quite keen to try again and spring is in the air!

I love the bottom photograph and the fact Goliath loves crunchy food - Ha-ha! (jack likes carrots for the same reason and has orange pooh afterwards!)

It's all healthy! Heehee. I just noticed Uno's perfectly pink toes, they do suit her! Goliath must find those pink pearls attractive!

Aha! Thanks for pointing that out! Unos' legs and feet are that pink because she is a pied budgie!
Pied budgies also have other distinguishing features - see how her beak is more orange than his?
And even more telling - her eyes - Pied budgies have no white iris rings!
Pretty interesting, eh?

Uno and other 'Pied Budgies' have good eye-sight even with expanded irises? I know nothing about budgies apart from winning one from Grace Brothers in a colouring competition when seven :) Luckily a cage, food and instructions were included.

Well thats a good question Anon, so I got out my books and did a quick search on the net - but I find nothing about whether or not thier vision is known to be impaired or not. My pied birds all seem to see as well as the others....perhaps they just lack or have a modified colouration of the iris.
I shall have to bring this up with my more knowledgeable pals, who will either know, or be happy to help me find out - Great question!

Also I should amend my previous comment - only the recessive pieds lack the iris ring!

(The more I look at the 'specifications' for the three main types of pied budgerigars - the more confusing it gets! Hehehe, Im definately going to stick with my favourites, the recessives.)

Let me know when you find the answer! It is possible its never been a question though :) The recessive pieds are less common because develop a recessive genetic difference? Sorry for all the questions ... I'm a genetic throwback myself :))

Oh questions are fine - anytime! Especially if I might have the answer :)

So far so good right?
If you breed two visibly recessive pied budgies together, you should get a whole clutch of pied chicks.
BUT, thats where my understanding breaks down. All the books and experts say not to do that - they say that the 'quality' of the pied charecteristics (feather) and the overall size of the birds will degrade over time. I know this is true with the Opalines, so I can only assume its true of the Rec. Pieds as well. But Im not sure just how that happens OR
if what they mean by quality only refers to birds bred for show (unrealistic expectations!)

You know, its got me wondering if your Jack's red collar is a genetic factor thingo - of if they are a different group entirely from the ones sporting green...

I understand now - thank you :)Jack being a red-collared lorikeet is classified as a species AND a subspecies of the Rainbow Lorikeets - from reading so far. The species name is Trichoglossus rubritorquis. In my opinion, they are quite different from each other in many ways, physically and otherwise. I wouldn't want Jack to mate with a lowly common Rainbow Lorikeet HAHHAAAAA.

Thanks Anon, very interesting! And I agree, you couldnt mix his 'blue blood' with any common bitzer bird hahahaha! :)

They look to be great lovers. Very sweet photos.

Thanks Hardwax! Goliath is really dedicated to her, while she persists in allowing other gentlemen budiges to call on her - most disgraceful behaviour on her part! LOL