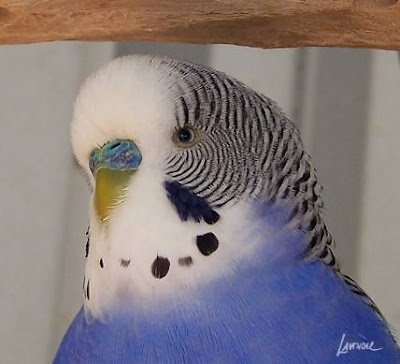 This handsome lad is a four year old Dark Blue Budgie (parakeet). When Magellan, Verdigris and thier siblings were nearly finished being hand reared, this fellows mum kicked him out of the nest. So I brought him in and introduced him to the group as thier "New Friend".

Since he didnt have as long a bonding period with me before he was ready to join the main flock in the aviary, he wasnt as tame as the other hand reared chicks. Its just recently that he has decided he'd like to have a go at thumb wrestling with me. He starts out innocently enough, but then he begins to bite. Then bite harder, and harder. My solution to this is, when he starts to bite my fingers, I pet him with my other hand. Since he doesnt like to be pet, he flys off.

Below we see New Friend with Uno. He has his head feathers all fluffed out, and is leaning in toward her while speaking sweet nothings. She seems unimpressed, doesnt she? And sure enough, her beau Goliath arrived about a heartbeat later to chase New Friend off. Better luck next time, Mate! 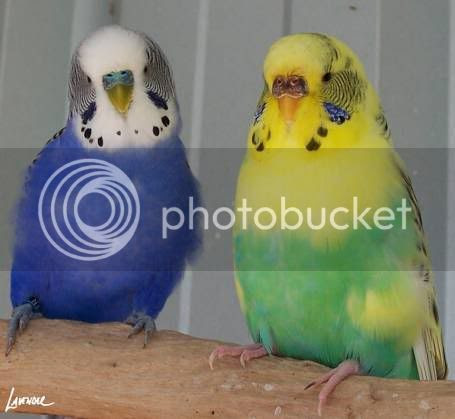 Hhahhaaa Uno really does look unimpressed! New Friend is a handsome colour! In regards to the biting, try using the other hand and place it firmly where the 'third eye' would be - down to his beak. This works for lorikeets, showing who is the boss. There is a bit of eye battle at first, but he might learn to stop biting hard!

Hehehe such a soap opera in my aviary :) For his colour, his mum was a violet bird, so I think he has a touch of violet in his blue - its a very nice colour indeed.
Thanks for the tip Anon, I will give that a go.
Lucky for me he is the only one who enjoys biting this hard, Im sure he is just getting carried away with the excitement of play, and Im glad he has decided to play with me like many of the other birds do :)

Ooops, I should have been more specific, I meant the tip of finger on 'third eye' with rest of finger leaning against beak - not whole hand! Hhahhaaaa. Encasing Jack's whole head like being in the mouth of a lion works too but can be risky at first with a VERY sharp bite. Yes, easily excitable!

Hehehe, like a hood for a hawk :)
Funny that I knew what you meant, but appreciate your clarifying it for the other readers - good one Anon!
I bet your Jack will be the life of the party today, hope he has a great time too!

No tips from me - just some admiring glances at these beautiful birds! Lovely colors, really.

BetteJo - Glad you enjoy seeing them, sure makes a change from spiders!!!! EEEEP!!! Hope theyve all gone now!

These are some beautiful Budgies!

these are real nice birds.

Thanks Sharon & Hoto Hope you had a great day!

New Friend doesn't seem to be like by fellow budgies!

LOL Captain he is kind of a loner. He was the only chick his ill-tempered mother, Indigo, had too. Maybe being an only chick didnt help him learn to socialize? But he's an alright chap, and handsome to boot! :)

Lavender without a doubt you have the most beautiful parakeets. These birds are gorgeous!!!

Thanks Ces! You can see why visiting the aviary can lift a dull day! :)

I had one of these - a yellow and green one - when I was little. The only bird I ever owned.

Hi Periette! You couldnt have picked a better bird to be your one to own, bet it was a bright little parcel of sunshine. Maybe on day you might like to have another, it could happen! tehehe

Thanks Rrramone, hey I really enjoyed your illustrations at your blog - will be stopping round there again, Cheers!