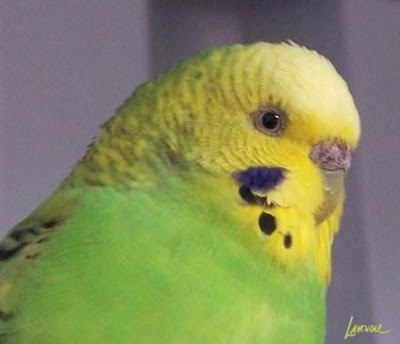 Verdigris is a four year old, green Opaline parakeet and Magellan's sister. Being a few days younger than Magellan, she didnt have as many feathers emerging when thier (mother plucker!) mother decided to try to pluck them out. So you can see on her shoulders where parts of her opaline pattern is missing, but its not as pronounced as on poor Magellan.

When I discovered they were being plucked, I asked a more experienced keeper what to do. His advice was to coat the chicks in vaseline, to make plucking them more difficult and unpleasant for the mum. Of course when I returned the chicks, she just started plucking again. To make things worse, that evening she wouldnt sit on them to keep them warm. Thats when they came inside with me, and I became thier mum.

Verdi, Magellan and I are still very good friends. Each visit to the aviary she will sit on one hand, grab my thumbnail in her beak and start 'thumb wrestling' me. She enjoys it so much, her nickname is Battle Bird! When shes had her fill, she sits on my shoulder, places her beak in my ear, and softly sings to me.

Verdi's favourite veggie is corn, and she prefers it on the cob.

Happy Sunday EveryBudgie!!
Posted by Lavender at 6:49 AM

Yes, she is more of a Lime green, than a Verdigris green - but Verdigris sounds more exotic than Limey!! LOL Have a happy day!

I'm so glad you took care of her instead of Mother Plucker! They would have had to be little battlers to survive anyway! Pretty girl, and enjoy Sunday as much as your Saturday! PS: Muscles waiting to attack another day so doing other half of yard now :)

That is a very pretty bird.

Anon, I confess I loved every minute of it! I fight temptation to hand rear (unless necessary!) with this mantra:
"Nest is Best!" Hahahahaha!

Michael Thank you! She is a bright spot in the aviary - Thanks for stopping by!

I love Budgie Sunday, this post is in my weekly wrap up this week. :)

What a wonderful name to choose for this budgie.

I read about you on Snoskred's blog. Nice to meet you, Verdigris. I am a cat, but I promise I will not eat you all up. You are cute.

Snoskred, Cool, Thank You! Your weekly wrap ups are a feast of info. Im glad you enjoy Budgie Sunday and am tickled pink youve included me in your wrap up!

Captain, Thank you, I like to think she likes the name too!

Daisy, hehehe We had a neighbor cat who used to hang off the aviary wire by his claws to get a better view of the birds, so Im sure Verdi would be very happy to hear that you just want to look and not snack! hehehe

she is so cute. Please stop by to see my Mute Monday

Hey Jadey, thanks for stopping by!

I adore budgies. I had 2 in my youth, Jawa was blue and his evil "wife" was green (funny I don't even remember her name.) I now have cats. The 2 don't mix. The evil wife met an untimely end before I realized one of the (long dead) cats could open the little sliding door. A nightmare story for another time.

I'll be back to visit again.

Hi Bevson - Perhaps its cold comfort, but at least it was the 'evil' wife that the cat got...(bet it wasnt a nice scene tho!)
I look forward to seeing you here again, as well as over at your blog! Cheers!

In French, it is called "Perruches". I like those birds, except they can be so noise when they argue... LOL

Hi Tricotine! Oh, yes! It can be deafening in the aviary sometimes LOL Its funny how loud they can be, and then once everyone has a treat - its so quiet in there its almost eerie LOL Too busy munching to chatter....
Perruches - Thanks for that - that could be a great name for a bird!

Well, you have been a good birdie mum!

Thanks Ces! I do love my feathered friends, they bring me alot of happy hours.