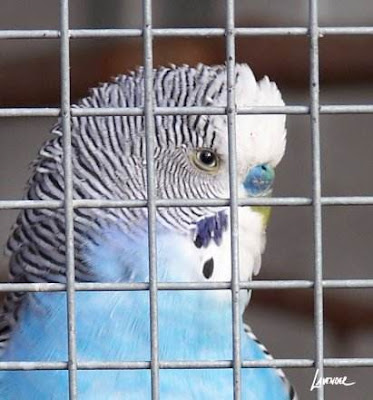 A three year old normal blue budgerigar (parakeet), he is called Big Boy not because he is especially large. But because it's kinder than calling him 'Bad Boy', as in the kind of guy who will always break your heart. Although why I should have concern for his feelings is a bit of a mystery.

A couple years ago he hooked up with Verdigris. Everything was going great between them. They set up a nest, had a great clutch of eggs, were wonderful parents together. But one day about halfway to the chicks fledging - BOOM - he was outta there. The skunk! (Verdigris and I raised the chicks from there.)

This dastardly rogue had done the same thing to Darkwing the year before. As a result, Big Boy will no longer get to go to the breeding room.

He's certinally handsome, especially when he raises the feathers on his head. His song is sweet and enchanting. But I wont trust another hen's heart to this cad. He doesnt interact with me or the other birds much, and if he has a fave veg, he isnt letting on what it is.

Mostly he sits in his favourite sunny spot singing to himself, and Ive no doubt, planning his escape!

Happy Budgie Sunday everyone!
Posted by Lavender at 7:49 AM

I don't see anything different with what Big Boy does from what other fathers do. Skunks indeed. Now Judge Lavender has denied him a breeding permit. Hahaha!

I must say, he is handsome and a beautiful player. Why If I were a bird...of course I would be an owl.

Sad but so often true Ces...although youd think these great big brains of ours would help control us a bit better LOL
Owls are totally cool! And wise to boot!

I love reading about your budgies Lavender! Good on you for saving the hearts of the other girls! He is rather handsome in a mysterious way and *I do secretly like bad boys* Don't we all! Hhehheeee.

Yeah, LOL, we all like a bad boy...pity we take so long to learn that if youre going to play with matches, youre gonna get burned ROFL!!!

I just think its so interesting - the different personality traits in the aviary, from this cad, to the ever loyal Goliath

Ha! Anon - thats right, Goliath is the marrying kind, and Big Boy is just the sort you have fun with before you marry ROFL!!! But you wouldnt bring Big Boy home to meet the folks! hehehe

This is exactly what they mean when they say "all about the birds and the bees"...

Big Boy sounds a sneaky charmer. He entices the ladies with his squarks, and when he tires of them, he takes off. Approach with caution!