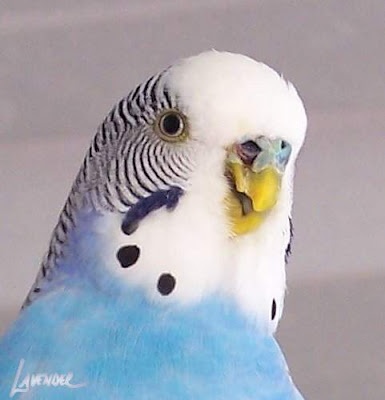 When he was just a featherless chick, a rogue hen invaded the nest. She attacked the mother hen driving her out, and then attacked the chicks.

In the three years since, Ive watched this bird very carefully, expecting that he would be susceptible to respiratory infections or, should he be unable to keep his beak in trim, not be able to feed himself. But neither of those have happened and at this point I dont expect they will.

Sure, he has buckleys chance at being adopted as someones pet. But thats OK, I will look after him for all of his days. Ive even seen him feeding his girlfriend! He can still do all the things that a budgie is meant to do. As a bonus, he has a very cheerful disposition too.

I thought Id name him Phantom (of the Opera), but decided against it. I mean, how would you feel, if your name was just a reminder of a traumatic event? So although Im not especially fond of the composer of Phantom, I thought "Andrew" was a nice enough name for this happy chappy.
Posted by Lavender at 9:25 AM

Oh Andrew is just beautiful...now I want a bird even more! lol!! I am really enjoying your beautiful blog!

He looks alright to me. Never underestimate the will to live in the smallest of creatures.

Andrew is very happy looking and a comical chap! Great portrait! A Rainbow Lorikeet and her partner visit daily and she too has 'no' beak but survives fine! Still put out a nice mushy porridge for her :)

Jdoriot, *LOL* Tempting arent they, and shucks, Thanks!

HS Altoona, isnt it amazing? LOL Just like a weed coming up in a crack in the driveway - it just keeps coming back! Bit inspirational really. Thank you!

Anon, he really is that happy - if he were a person Id tell him to knock it off with the happy face all the time LOL. I bet your Lorikeet visitor appreciates having a specially prepared dish - onya! Thank you!

Andrew is a grand name for the budgie. Lloyd Weber should be jealous.

Hi Mimi, thanks, Im sure Andrew would enjoy that LOL Good luck finding some decent iced tea over there! Cheers

He's gorgeous. My dad used to breed budgies and one year he had a female attack a chick of hers. The chick was a bloodied mess when dad found him, but he was still alive.

Logic would have been to put him out of his misery, but dad was quite a softie when it came to animals. He hand raised this little guy, and named him Gutz. He could eat. He had brain damage from the attack, and could never fly. He was mums favourite bird.

He died when he was about 18 months old. I still remember how shattered my mum was. I think everybody cried. He was such a personality.

Sometimes being a softie isnt such a bad thing, well, thats my story and Im sticking to it. Its hard when you get attached, but how can you not? Still that 18 months he had was sure better than nothing...Thanks for stopping by!

Took a photo of our beakless lorikket this afternoon, we call her Puffin :) She'll be blogged eventually ...

Cool! I will look forward to it, cheers!

Andrew is a good name for a happy and thankful bird and an endearing post.

Ces- Thank you, I wonder if it is thankfullness that makes him such a happy lad, what great insight you have!

Gday Puffin!
Hey, I dig your custom gear! Makes you look like a lean mean porridge eatin' machine, flash as! Pleasure to meet you Puffin.

*flashing eyes* Your girlfriend is very lucky and you are so *FUNNY*! My Husband has a sense of humour too. We visit Anon mostly in the Winter (she only makes porridge when babies are about). *BWARK*

Your hubbys not around now is he? I wouldnt want to be tossed over his shoulder, and he has a much bigger beak than I do! That Anon is smart as!