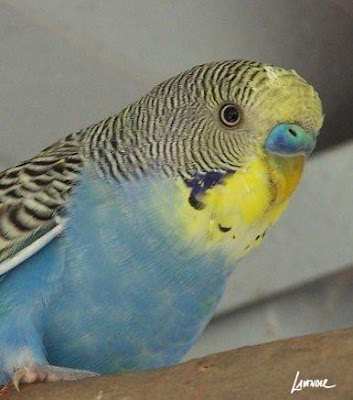 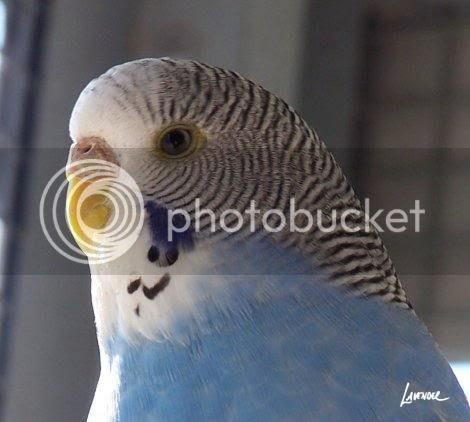 Still very camera shy, they spend the whole day together in a world of thier own. Yesterday I watched them play 'keep away' with a twig. One would pick up the twig in thier beak and run, the other chasing behind. When the chaser caught up, there would be a brief tug of war, with the winner of that becoming the runner for the next round.

Since they are near inseparable, I thought it would be nice to name them something that went together. Hook & Ladder? Peanut Butter & Jelly? Wattle & Daub? Sure, why not!
Posted by Lavender at 6:57 AM

OMG THEY ARE SO CUTE!

Thanks Doris! My budgie friends are just as friendly as they are cute - glad you stopped by and met some, have a great day!

I am continually amazed by your photography! Wonderful pics!

Hmmm, that 'Wattle' looks even less than a wattle than the other wattles without wattles! HAHA. I think they are acting out their liking of 'Wattle & Daub' names by playing with what they know as building material :) Great photos!!

BetteJo, aw shucks, Thanks! I hope these two get used to the camera soon, these were hard to get as they kept hiding behind other birds LOL

Anon! Wattle-less & Daub? Hahahaha!! Maybe the twig game is where Wattle & Daub came from...how do you go from PB& J to wattle and daub otherwise? Tehehe

That is a sweet! I would be entertained just watching them play.

Hiya Ces! I was greatly entertained by thier game, I watched for about 10 minutes before being summoned back to other duties tehehe :)

They look lovely. You have a fine collection, Lavender.

What's up with Daub's nose? Why is it peeling?

Captain Thank you Captain! There are so many varieties, Id have a hard time choosing just one - good thing I dont have to choose LOL!

Ces Daub's nose is very rough, it does look like its peeling, but its just acquiring texture and will turn a darker brown too.
Im not sure of the hows and whys, but it means that she is a girl and nearly fully mature.
When she is fully mature it will be a darker brown and very flaky or rough looking.
During her life it will change quite alot, with it being darker and flaky-er when she is 'receptive', and pale and smoother when she isnt! (I think I put that pretty delicately, tehehe!)
Thanks for asking Ces!

I know what you mean about watching their own little world...my dogs are like that...I can sit for hours and watch mine interact, because they do have special little games and rituals.

Thanks Pawhealer! Your doggies are very cute, sometimes I wonder if they are as amused by us LOL!

Thanks for the answer Lavender. Now off to see the eggs!

Wattle is much cuter than Daub! ^_^
But I'm sure they are both cute in person. It's just a pic you know. :)
I'm not so to birds, but I love watching them fly, especially if they are in large number flying together.

Hi Bambi, Youd probally love to see a flock of wild budgies - as would I! Nearer the centre of Australia they live in HUGE colonies of thousands - simply amazing. Thanks for stopping by!