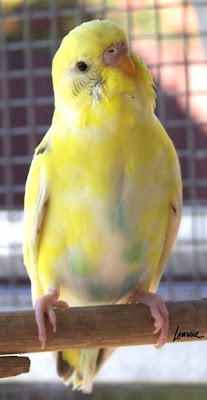 Long time readers might recognise this little budgie from when he first fledged from the nest. His adult plumage is still coming in, changing the yellow from a pale sulphur to a much brighter shade. He has the orange beak and pink feet of a recessive pied parakeet, but his pattern is not standard for that variety. His mum is Goldie and his biological father is Gorgeous George.

Napoleon was last to hatch, and a very small bird in stature. He is still missing his tail. When released into the main aviary, he set about being a giant nuisance to everybudgie. He would deliberately land on other birds heads, push anyone out of the seed dish and then just sit in it, and pick fights with everyone - including his parents! I decided that he had "little bird syndrome", and dubbed him Napoleon. All the other budgies didnt take too kindly to this obnoxious behaviour, and soon had him sorted out.

In the last picture he is talking with his surrogate father Freebird. Being closer to the camera he doesnt look as small as he actually is. But you can see what a difference a tail makes. I suppose I could have named him "Canary" instead.

Have a great day Everybudgie!
Posted by Lavender at 7:33 AM

Napoleon is four months old already - where does the time go?

OK, Im off to clean the aviaries and once thats done I get to have another big mug of coffee and read my fave blogs, see you all soon!

I'm glad he's sorted himself out, he wouldn't enjoy it in the St. Helena avairy!

ROFL - good one Barkfoot! Wish Id thought of that :)

Haha! This is a funny narrative about how Napoleon got his name. I am amused that he has a biological and a surrogate father. Oh my, you have a regular "Gerneral Hospital" or "As The World Turns" bird soap opera there Lavender. These birds are lovely and the colors are so pleasing.

I like the dots on his tummy - will those stay?

Ces Tehehe Gorgeous George 'seduced' Goldie behind Freebirds back - 3 times! It is a soap opera, but lucky for Goldie, in the end, Freebird forgave her. Anybudgie could see that Gorgeous George is irresistible!

BetteJo I dont know with this one BetteJo....he is a bit of a mystery. I think hes gotten a double dose of the gene for pied, and thats why he has some pied features, but isnt 'properly' pied...but looks are only feather deep, right? LOL

I LOVE your budgies stories! Much more interresting than "General Hospital"...Hhehhee. The birds are soooo cute! :) It's funny to see how each one has its own personnality! :)

You can tell the resemblance between George and Napoleon.

merlinprincesse Im happy you enjoy them, I love sharing them! It amazes me too, how much like people animals are - or vice versa? LOL!

Captain There no mistaking the recessive pied gene, is there? Once they have thier feathers - the truth is out! LOL!

I wonder if Napolean will get much bigger? A funny narrative about this little guy, and I think he knows he's cute, despite his ststure.

Hi Hardwax, he could get bigger, probally not much, but I think hed be grateful for any improvement - probally wishes on stars for a tail :)

There is hope for him to not be so small in the end because Napolean was actually 5 foot 6! He has interesting genes with those 'naughty' parents, ahahhaa.

It looks like I was saying the 5'6" Napolean had naughty parents HAHA. It wasn't the French who spread that rumour about stature :) You might have to name the next little budgie "Lavender" :)

Hahaha! I didnt even catch that lack of distinction tehehe and I cant get over that Napoleon would have been taller than me - just shaking my head over that - Oh well! Perhaps I will name a budgie Lavender one day as some sort of penance! :)

The blues & yellows are so vibrant!

Hello Napolean! What an inquisitive looking little fellow you are!

Hello Perriette! He is very curious - must be trying to learn everything about being a 'big' bird :)