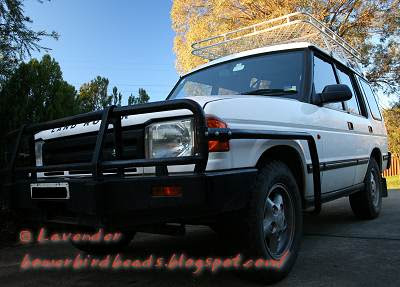 I took this shot for The Most DH, I think the artsy angle of the shot will make him laugh. He has been doing alot of work fitting out our Disco for future tours. He took the back passenger seats out, and filled the whole back with a sort of low set of drawers he made. In those drawers will live all and sundry recovery gear and perhaps just as importantly, the Tea and Coffee Making Facilities.

In this shot, you can see the exterior accoutrements we have recently added, via ebay. She had an alloy nudge bar on her nose originally, but we think the full steel bullbar and matching side rails are much sexier. And although a brand new one would have been nice ($1300+), a used one has a more authentic appearance ($600+/-) for our old girl.

Sometime in the last few weeks we won the auction for the roof cage. The seller was only three or so hours down (?) the coast, so we planned a day trip to go pick it up. The next few posts will feature pictorial highlights from that day.*

The last two or three days on this new med have had some promising signs. Although concentration is seriously imparied, which is why Im quitting here for today, Its been an hour an a half since I began this post! (((LOL???)))
Posted by Lavender at 12:45 PM

I'm sure The Most DH will love the pic, it makes the car look so dashing!

That is one cool car. It's begging for a couple of 'KC Daylighters', and maybe a roof tent. It makes you want to go on adventures.
Such accessories don't suit my little Ford the same way, but the government has made the running of a 4X4 prohibitively expensive here in the UK (£400 yearly road tax, and 80% tax on fuel, hence over £5 a gallon).
So glad to hear you're feeling a little better.