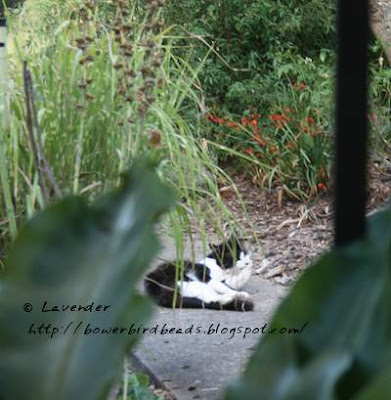 Last October I talked about the five stray cats I was looking after . One was found to be a malingering housecat. A deep and meaningful conversation with his owner solved that one. Another just disappeared, which is a heartbreaker, everytime. The remaining three, two of them pregnant, were brought to our local animal shelter. None of them had micro-chip ID's.

At the shelter, I learned that their first test would be an observation of temperment. The rep explained that the 'socialized' cats would all hang out together in one group, and the 'ferals' in another. I thought that was an interesting, but un-scientific test. But given what I know about the behaviour of cats, I would agree its as good a start as any.

If they found that the surrendered cats were 'socialized', they would be health checked, and if passing there, they would have a chance at being re-homed. As I had been 'socializing' with each of these three, I had no worries that I was doing the right thing.

Surrendered cats found to be 'feral' are euthanized within days.

He is definately feral.

As usual Folks...to be continued.
Photo taken, surreptitiously, through the lounge room window last January.
Posted by Lavender at 3:36 PM

this is a wonderful piece of writing! you set everything up for the last line--a delightful shocker.

i love getting a glimpse into your daily life. it's good to hear what's going on, my good friend.

Well you know I'm a cat lover. I'm pretty sure the abandoned cat we took in would not have found a home if we had brought her somewhere. So she lives with us. Doesn't like the other cats and only likes me on her own terms. When I took her to be spayed - they had to treat like a feral cat - covered her with a towel to carry her, etc. I worry about what will happen if she gets sick - they wouldn't be able to examine her.
Can't wait to hear what happens with your new visitor. And I'm glad you took the others to a shelter. Especially the pregnant ones!