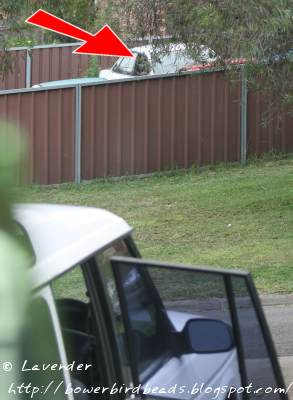 From my kitchen window, you can see the neighbor's 'dead car' that our lad has been living in. Leaping through the missing window was a breeze for him. But he seems to be making a smooth transition to the big ugly box on my front porch. It is surely less drafty in the box, and the squishy soft bed inside just seals the deal. 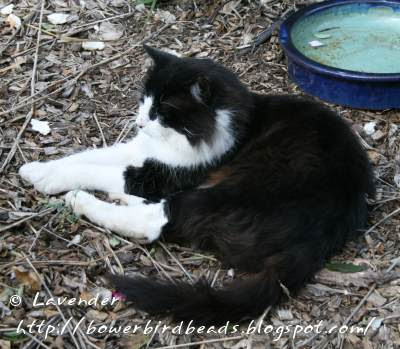 No rain today, so at last he can catch up on his garden naps. See how close I can get? It gets better! 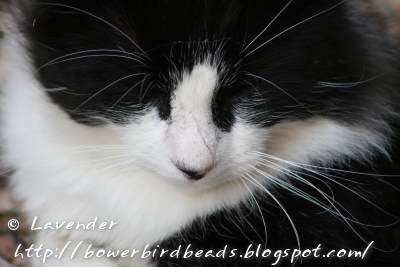 Whenever I am in the kitchen, Aurora will be under foot, feigning starvation. Last week as I was trimming the fat from a steak I had a brainstorm. Aurora got a bit of course, but there was way more than one sedentary house cat should have. So I split the remaining fat (with a bit of meat attached for good measure) into daily portions and began a new experiment.

Taking a flashlight/torch with me into the garden after dark, I found Bonne Chance in one of his usual spots. As this was a new time and place to be approaching him, I was very careful to move slowly and speak softly. I held a warmed morsel out toward him, and let him catch the scent. He meowed. A Meow! At last something besides a hiss.

I placed the morsel on the ground and retreated. He was on it immediately. I am sure that in this cold early winter, the extra fat will do him only good. He is still getting a breakfast and a dinner with more balanced nutrition.

The next night, we repeated this new routine, and he took the goodie right from my hand!

Tonight, I was out of the beef bits. I had saved some chicken bits, but they were still frozen. So I brought out a few of the Inside Cat's Multi-national Brand treats.

Seeing me come out, he walked to me - meowing! A lovely, but manly, meow. As he reached for the tidbit in my hand, the scent obviously was not what he expected.

He took a step back, and gave me a confused look. I apologized, explained, and offered the treat again. I had to really work hard to defend this obviously paltry subsitution, and then it happened.

He leaned into my hand, running the side of his face and neck along my fingers, not just once, but several times. Dropping the treats, I tentatively scratched the back of his neck, ears, and back. He purred and purred and purred. One of the world's best sounds, a cat's purr.

After a few minutes of lovin', he broke off and began to eat the little pile of treats. I retreated inside to leave it at that for the night. Short, sweet and positive. You can bet I will have some dandy treat for him tommorrow night!
Posted by Lavender at 8:36 PM

I once had a stray cat named "Frisky." We took care of it for a few month. One day his paw was swollen up so we took it to the vet. It turned out he had feline Leukemia so we had to put him down. That was a sad time, but I'm glad we got to take care of him as long as we could.

He's gorgeous! Give him a hug from me too when you finally get the chance. He'll reward you with one soon.

I betcha it was the apology. He liked that you recognized he is much too special for just regular cat treats! You made that concession, and he gave you some loving. He just wanted recognition for his regal status!

Nothing like a treat to tame the savage beast ;-) I think you might have a new inside cat soon! Cheers!

Wow, you must be chuffed. Nothing beats that feeling when you make a breakthrough.

oh what a smoothy he is. You are putty in his paws now.

oh my god. this is a true love story.

it gets better and better.