Lampworkers Tag Team Me For A Meme 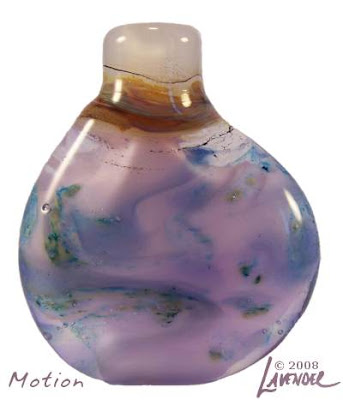 Donni landed the first punch. Donni is a very interesting woman - creative in more ways than just her lampwork - speaking of which I have one of her beads and I love it, it has such depth, you can spend ages looking at it! So go get yourself one and visit Donni's blog too, theres links there to all her creative pursuits.

Then Vonna introduced herself by slugging me as well! And we've only just met, but she makes a very pretty bead too - so click over and check her out!

SEVEN FACTS ABOUT ME:
(Kinda off the top of my head since its getting late...Hmmmm...)

ONE
Im a cranky old woman, and have been since I was 6 years old!

TWO
Currently I am being kept alive by the promise of a latte.

THREE
Still havent figured out what I am going to do when I grow up.

FOUR
The next person who says to me...
"Oh, you are so lucky your'e a blonde"
...is going to be eviscerated.

FIVE
I like to name things. Even inanimate things, for example:
I have a bra I call "Civil Engineers Pride"
Some undies called "The Underwear of Ambiguity"
and several T-shirts called "More Hole-y than Righteous".

SEVEN
I wish I knew then, what I know now.

And now Ive gotta spread it around. You know how it goes, I tag seven of you, and you each tag seven in return RAH! RAH! GO TEAM! Know what I mean ;)

Barkfoot of The Perambulations of Barkfoot
BetteJo of A Bead a Day
Ces of Ces and her Dishes
Melanie of Creating Nunde
Sharon of Mooky's Hood
Young Werther of Forlorn of Thee
My evil twin at Oculus Sinister
Posted by Lavender at 12:38 PM

Thank you! I've got to go put that thinking hat on now :)

Lavender, thanks again for the encouraging words.

I will see what I can do with the tag. Thank you. This bead is absolutely beautiful and I have a desire to put it in my mouth and run it through my tongue.

hahahaha, you made me laugh!!!

I'll check out those links later, after I finally get my day going. I've been lazy today, like everyday.

Haha! I wanted to comment about the bra but could not think of a clever remark. I don't know if I can name my underwear. do you have to name them all or just one?

I suppose it's better to have T-shirts rather than underwear that are called "More Hole-y than Righteous".
7 facts! I'm not sure about this, I'm already struggling after only one!...

Ces Oh Thank You (re: bead) thats one I wish I hadnt sold, never could get quite the same effect again.....Dont worry about the tag at all - purely optional!
And No I dont name them all - just the 'exceptional' ones Teeheehee

Sandy :) Lazy can be good! Sometimes even necessary - I was rather hoping to get away with it myself today - but alas.....

BetteJo Hahaha - how'd you go? Find any that seem to merit a name - remember - they dont need to be nice merits LOLz

Barkfoot You are so right there re: underwear - especially for you blokes!!! LOL
No worries about the tag - the best part is the linkage!