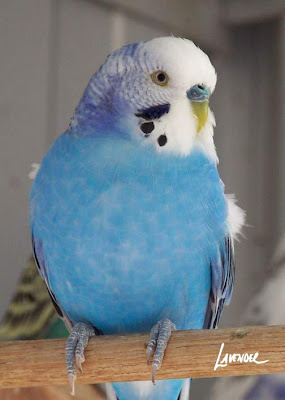 Meet my favourite budgie mate, Magellan. He is an Opaline budgie, in short this means that the feathers on his wings are black and blue, instead of black and white. He is four years old. You might notice some fluffy bits on his shoulders, thats down. Normally you wouldnt see a birds down after they get all thier feathers in.

However, Magellan and his siblings had a crummy mother. As soon as her chicks started getting thier feathers, thier mother started plucking them out. (Mother Plucker!)

So I hand reared Magellan and his siblings. One day while I was feeding him, when he decided he'd had enough, he ran off across the desktop at lightning speed and before I could catch him, he fell off the edge and hit the floor. He was perfectly fine, (but I still felt guilty as hell).

I asked him nicely not to go "exploring" off the "edge of his world" again untill he could fly. Thats how he got his name, Magellan was the first explorer whose name came to mind.

Now, every trip to the aviary he is the first to greet me, and rides on my shoulder as I fill the feeders etc. He is fascinated by my eyelashes for some reason, and his favourite veggie is pumpkin. 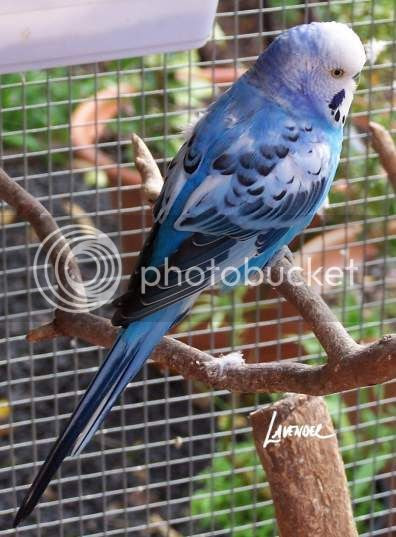 Aww Magellan is beautiful! I wonder why the mommy did that? I'm glad he was ok. I've always loved birds. My neighbor has a cockatoo. A mouthy little thing but so sweet. I love him.

I'm laughing at "mother plucker" I have called a neighbor’s hen "mother clucker" because she clucked so much. My parents raised chickens when my brother and I were young.

Hi Opal! Its a bit of a mystery why some moms do that - some people claim it means the mother is deficient in vitamins - but nobody is sure.
LOL mother clucker, thats a good one too! We ran 'chooks' (as we call chickens here in Australia) for awhile, they can be very silly birds too, fun to watch!
Thanks for stopping by - I will see you over at your blog again very soon, Cheers!

HAH I too loved your description "Mother Plucker"! Magellan's black and blue feathers are stunning, he is a handsome chap, and adventurous :)

Thanks Anon! Hehehe - I have to admitt Ive been known to use it for non-feathered species too. I wonder if it would be wrong to teach a parrot to say it? LOL

Another wonderful photo, my friend! I'm with everyone else..."mother plucker" is too funny! And yes, I think you MUST teach a parrot to say it!lol!

Mother Plucker ought to be taken to the funny bird farm. Magellan would have been history had you not intervened and because you did see what happened: a grown woman sighing "Aaaw!" What a lovely bird. Blue is my favorite color.

Mother Plucker now lives with a little old lady two streets away where she is treated possibly better than she deserves lol...
Thank you for another insightful comment, you do my heart good!

I am in love with this bird! Might I steal your picture of him for my desktop???

Hi April, I really appreciate your asking, I will stop by your blog and let you know - see you there!