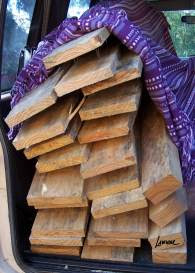 The Most DH has scored a win for the environment. The large company he works for (which shall remain un-named) receives shipments of raw materials on heavy duty pallets of pine. Once unloaded these pallets were sent off to landfill! DH noticed this and approached the company about reusing them as an environmental initiative. The company’s first reaction was not receptive. They claimed the cost of freight to return the pallets to the supplier was cost-prohibitive.

He persisted, and in the end, was able to show upper management that the costs of recycling the pallets was only slightly more costly than landfill fees. The company agreed to recycle the pallets, and there was much rejoicing.

The materials supplier did put one condition on the deal; damaged pallets were not to be returned to them. That’s when DH got another brilliant idea, and asked if he could take away the damaged pallets. They agreed, and now when there is a broken one, DH breaks it up into its parts and carts it home. (See top photo).

The Most DH loves working with wood, and has made me a new desk with this reclaimed timber. (See photo below). The picture doesn’t really do it justice. And it’s a perfect size for the room it will live in, unlike the old desk (which is going on to its new life with a young relative). Next is a custom bookcase unit, which will solve another storage problem.

All in all, it’s a win for us, and Mother Earth.

Great news Lavender, Mothernature would be pleased! DH has made a mighty fine desk and soon a bookcase! I can imagine in a few decades time you might need to install a fireplace because house packed full of furniture heehee.

What a wonderfully resourceful way to use the pallets. And, it's a beautiful desk, too. Great deal, and kudos to your husband!

Hahaha! Thats not a bad plan! Might be a good idea to buy stock in sandpaper and shellac suppliers too!

Hi Shelly, Thanks for stopping by!
Im very proud of him, and he has a great time working with wood - hey Ive also got a nice big pile of wood shavings to mulch the garden with! It just gets better LOL

I wish I could build something of my own so I can spare mother nature the heartache but I couldn't construct anything even if my life depended on it ...

Hi Nick! Aw, but you have other talents :) !! Enjoyed your last post, keep up the good work!

I can't believe that table is made out of old pallets, and to think of the amount of pallets I've used in the past for kindling...Good skills.

At my office, I've been moved desks for the fourth time this year...and it's only July!

'Ello Chamonix - kindling is still better than landfill LOL
Thanks very much for your comment!

Morning Captain - thats a bummer! Unless youre getting a better view each time....well, one can hope!

Now that's a mighty pretty desk! And your DH gets bonus points for being so creative and persistent!

Thanks Denise, Persistence pays off!

That's awesome. I thought most companies used the pallets until they broke/wore out. Good thing he was able to convince them. Also, Pine is a really nice wood. Why would they want to just landfill it?

I would love a bedside table made out of pine. It smells awesome.

Howdy Spaceman Spiff, Nice to meet you! Yeah, I thought most companies did that, so I was really surprised about this - but - I guess it takes all kinds to keep lanfills overflowing - Yikes!
Pine is wonderful wood, we used a shellac to seal it so I cant get the nice scent from this piece, BUT you do get a lovely honey colour that just gets better with age - Thanks for stopping by!

Saw your blog on using recycled pallets. Great inventiveness. I work for one of the largest pallet recyclers in the United States and we currently keep 100,000 pallets a month out of the landfills. And any scrap not usable is sent to be made into landscaping mulch. Even the nails are sent to the scrap yard to be recycled. You can view our state of the art facility at www.bopallets.com let me know if you have any comments. jasonchapman@bopallets.com.

Jason - thats Brilliant! Fantastic job youre doing there! And it just makes sense, doesnt it?

I hope that reading this post will just help everyone keep thier eyes open for possibilities available to them. No matter how small - it all adds up!

What a beautiful story. We ceratinly make too much trash even of things that are not trash. The earth is not disposable.

sandyvtw Thanks Sandy! We love keeping perfectly useful pine out of landfill (were they nuts?)
Thanks for stopping by and commenting, I enjoyed visiting your blog - lots of interesting projects going on with your Vermont Timber Works. Enjoy your glorious autumn, Cheers!

Thanks for stopping by Lavender. I'm enjoying yours as well!