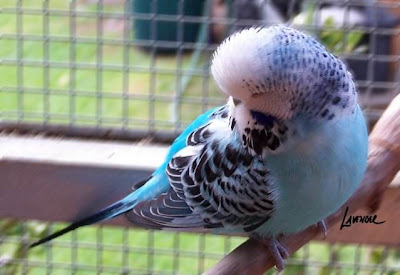 Baiter is my other 'old timer', he is eleven years old. Thats just two years younger than Gandalf. Both these birds came to me from the same exhibition breeder, who was retiring them from his stud. I did hope that they would contribute thier genes to my breeding program, but it wasnt required of them - which is good as neither has!

He is a very handsome Opaline Sky Blue. Youre probally wondering what kind of name is "Baiter", well, where as Gandalf was just not interested in breeding full stop, Baiter is into ummmm, to put it as nicely as I can, Baiter is into 'self-loving.' Thus he was named Master (Mstr., not Mr.) Baiter, Baiter for short. Perhaps he is confused, or has some sort of germ phobia, or maybe he has intimacy issues, I dont know. But he enjoys taking care of his own needs with perches or toys. To each thier own, right?

When I visit the aviary, I am always greeted by several of my birds. Many like to ride on my head, its the grandest hat anyone could ever want to wear. Some like to just have the ride as I move about doing my aviary chores, some like to try to preen what must seem to them some very strange feathers. But when Baiter gets on my head, I have to admitt I gently shift him off. When Baiter 'sits' on my head, its, well, its just a little creepy. Ewwww.

As you get to know a group of birds as I have mine, you can easily see that they all have thier own personalities. Good points, shortcomings, quirks - just like people. It fascinates me, and I hope it amuses you.

Baiter's favourite veg is celery, he starts with the tender leaves. Once he has finished the leaves I give him especially, he will pinch other budgies' leaves, and repeat untill there are no leaves left in the aviary. Then he turns his attention to crunching up the stalks. What a character!

Comments feature more information on how budgies mate, for interested parties.
I will make this info into a post of its own soon.
Posted by Lavender at 9:24 AM

Just in case anyone is wondering,
No, Im Not making it up!
But he is pretty to look at - just choose your moments carefully hehehe

OHHHH this is TOO FUNNY! I don't really want to say I am 'pleased' to meet Baiter :) The creepy budgie HAHHAHHHAAAAA. Now, if it isn't too much information Lavender, I am very intrigued as to what a Master Baiter looks like when Master Baiting .... I want details .... how can you tell? YES I AM naive!

LOL! OK, well, you know how when birds mate, they rub thier vent areas together? Well Baiter spends alot of time rubbing his vent area on vaious things - including my head when he has the chance. He is the only one that does this - Thankfully! hahaha

While he is doing that, he does the talk/song thing they do when mating, and the eye thing.

I dont know if the eye thing is just Budgies or not, so I will describe that...
When a budgie is very excited about something the pupils of thier eyes will dialate/widen/dialate/widen/etc - its a very cool thing to observe!

Its done usually during mating but also when courting a mate. Occasionally seen when they are just generally all worked up over something - but it always means "IM EXCITED!"

TMI? (Too much information?) hahaha

Okay! You have to excuse my ignorance Lavender :O

I haven't been close enough to mating birds to really know what is happening. Also to know what a "vent area" is. Is it the same as their pooh-pooh hole? Also, what talk/song thing? What makes it sound different? I'm asuming it doesn't sound like violins. Please be specific!

Jack flashes his eyes ALL the time! I want to know what he really might be doing on top of my head! He also 'bobs' a lot but there usually isn't anything he is 'bobbing on'! This is the true reason for all my questions .... :O

Nothing wrong with a bit of self love. ;) hehe but trying to involve other people is where he goes wrong!

Hehehe too cute Anon! When a single bird lives with humans, they often select thier primary care giver as a surrogate mate - so, you could be recieving some attention you wouldnt have counted on, hehehe. But as long as everyone is happy - there is no harm done! (Apparently, we humans are the ones with the hang ups, not the birds! LOL)

Sorry my previous answer left other questions, I will try to answer more fully here:

Yes! The vent area is where they poop from. In the case of birds, the vent is a single opening in the body from which poos, sperm, or eggs escape.
Although each of those things comes from a separate organ inside the body, all the plumbing for those organs share the one outlet: the vent.

Its noteworthy at this junction to say that male birds do not have the "apparatus" that most other males of any species posess. (Wink Wink Nudge Nugde not going to use that word for the search engines to find!) Sperm simply exit the testes into the appropriate duct and exit thru the vent. Consequently, there is a bit of luck involved in whether or not sperm find thier way into the females vent.

When birds mate, the male stands on the females back and curves his body around hers so thier vents meet, and then starts to rub(grind?) his vent back and forth against the females vent. The male will use his wings to enclose the female as best he can to help him hang on. Often he will fall off.

Its almost funny to watch, I dont know if it frustrates them!

Now bobbing is a bit different and I know less about it...bobbing is more a feature of the larger parrots, such as Jack. Although budgies do a similar bobbing motion with just the head during all thier communication.

What makes it sound different is its sense of urgency, Ive tried to think of a phonetic way of expressing it, but, it escapes me!

I think if Jack were pulling a 'baiter' - youd know for sure!
With Jacks eye flashing, I think it could just be he is excited - after all, without a feathered mate, anything could be more interesting than it would be otherwise!

Hope that helps! Give Jack a grape for me, he is so handsome!

Hi Snoskred! I agree totally! Maybe if Baiter were human, he'd be a flasher? ROFLMAO

Oh dear, I think if Baiter were a human he would be more of a flasher, he would be a goal bird!

Thank you SO MUCH Lavender for answering my questions. I don't think Jack has adopted me as his Baiter 'mate'. PHEW! I am his favourite though :) He has NEVER touched my vent! HAHHAHHAAAA.

I would love to hear a "talk/song" thing. Maybe one day you could do a recording :)

Aw thats great to hear Anon, its all purely platonic! hehehe
DH did recently buy a small video camera, to take on fishing trips, but he so rarely gets to go.......(you know what Im thinking!) hehehe

I laughed a lot at this, Lavender! If anyone asks why he is called Baiter, you're going to have to explain!

My guess would be intimacy issues, for sure. Poor little guy needs a therapist! He is very beautiful...perhaps it is narcism...too much self love.

Oh my gosh, this is so funny! This is certainly about how the birds do it. HAHAHHAHA! Sometimes I feel embarassed when I see animals do it.

Hi Sparks - Thanks for returning the favour!

Captain - Im glad you got a laugh! I was hoping for everyone would see the humour here, what a character!

Dawnae - Narcissism! You know, you could be right about that, hehehe. Perhaps we will give him a mirror and see!

Hi Ces! Yeah, I get embarrassed sometimes too. But it is terribly funny too! Interesting how my laughing at them doesnt bother them one bit, Im sure (I hope!) people are much more self-concious at those times, hehehe