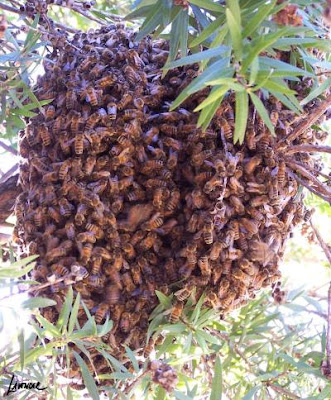 Now, dont get me wrong, I love bees. And, Im flattered that they think my gardens looked like a great spot to set up shop, but...

They formed this (12x8 inch/30x20cm) ball o' bees in a half an hour. Only 10 feet (3 metres) from the front door, and 6 feet (1.8 metres) off the ground, and The Most DH is deathly allergic. If they hadnt chosen this particular spot, we might have just left them to thier work. But here it was just too risky to leave them bee (pun intended).

We made a minimum of 20 phone calls to local bee keepers, bee keepers associations, bee fanciers, local council - the lot. Everyone we talked to said they didnt want them, didnt need them, couldnt be bothered, just get a nest killer spray, etc. We did find one man who would come in three days and required $100.00 plus tax to do the job. (ACK!)

We then re-called everyone who hadnt answered the first time, or that we'd left messages for earlier in the day. The last number to try got an answer! This gentleman also could not come to claim the bees, but took our details and promised to ring round a few of his friends and see if he could round someone up. I admitt I didnt believe he would bother.

But then at dusk, two strange men appeared on our front lawn. Basically what they did was shake the bees off the branch and into a box! It was over so quick I didnt get much by way of pictures of it. The men did get stung quite a bit, but I got stung only once while watching. (It wasnt anywhere near as bad as Ive been lead to believe, Ive had worse stings from wasps).

When they left we discovered one gent's sunglasses had been accidentally left behind, which turned out to be very lucky for us. Find out why when the story of our Bee Siege continues tommorrow!


NSW Dept of Primary Industries Fact sheet on Bee Swarms, Why & What to do
Posted by Lavender at 7:54 AM

This is surreal. It's like an Alfred Hitchcock movie: Lavender and the Bees! I would have fainted if I saw this in front of our house!

Hi Ces Tehehe I went wildly between being totally fascinated and really afraid hubby would get stung - first thing I did was take pictures, second thing was plan what to do in case he got stung, then went back out to take more pictures hehehe It was pretty surreal to be so close to so many bees!!!

Lavender,
Between your birds and bees, I picture you living in the jungle somewhere. I'm starting to wonder if you have electricity. Where in the heck do you live?

i got stung by 3 wasps this summer and it was a federal event! this is totally fascinating. i can't believe the center of this is all bees.

OH Lavender, you will love a future 'Photo' post I have (but won't be a while) or not! There were MORE than 5 thousand!!! I'm glad your hubby didn't get stung, a trip to the hospital would have made your day even crazier! Watch your letterbox because it is a favourite place for swarms to stop (inside where you don't know they are there until you stick your hand in)!

Pawhealer ROFL! Thanks for the laugh - I wish I lived in a jungle or 'out bush' as we say here...but Im in a quite ordinary suburb....so ordinary I sometimes forget Im living in Australia! Sad, but true!

KJ Three! was three too many KJ, they have a much fiercer (is fiercer a word?) sting than the honeybees! I hope they dont visit you again next year!
Yes, all bees, its so amazing. When the breeze blew, the 'ball 'o bees' rippled like a sheet in the wind - it was unreal!

Anon Egads! A bigger one than this (((shiver))) Im looking forward to that post too! Thanks for the heads up on mailboxes, Im very glad they didnt set up in there - creative little buggers arent they? :)

I saw this once. I heard buzzing and looked out the window - there was a cloud of bees in the yard which got smaller and smaller until they all seemed to melt into a particular tree. I looked later and saw a huge hive just covered with bees - ugh! My kids were toddlers at the time and this was right in the front yard! I made phone calls too but didn't ask enough questions. The town I lived in then - sent some guys out dressed in what looked hazmat suits - and they sprayed the hell out of that hive with some kind of chemicals! The next day when I dared to get close there were dead bees and pieces of honeycomb all over the ground. They apparently killed them all and left the carnage behind. I was pretty naive - I thought they would move the hive - not kill it. Still - your pictures gave me goosebumps. Bees are good - but not that many too close. E-e-e-w-w-w.

Mine aren't clustered, so letting you know now so you can spot them later - won't be saying much ;) There is a problem in Australia about bees not producing honey because of the drought, and confusion of seasons with flowers. Honey has been getting more expensive for about five years now. I don't know if your bees are 'honey' bees or not but it's good they have gone somewhere else!

Hi Lavender, I'm scared to death of bees. a lo0ng time ago and for a few weeks I was totally terrified of heading out the house ... LOL!

BetteJo Aw, but how were you to know? And with little ones - and thier inevitable curiousity - it was probally the best thing to do. Those beekeeper suits do look like hazmat suits too - and I never thought Id need either of those in my wardrobe untill this happened LOL !!

Anon Oh Thanks for the clue - I will keep my eyes open for your bees when they debut. Apparently there is also some sort of parasite that is attacking our bees and wiping out whole hives - which is one of the reasons we thought keepers would be keen to get Free-Bees - (oh! The puns are getting WORSE!) Tehehe
But yes, honey is getting pretty exxy - nearly a luxury item! ;)

Nick Sorry Mate!!! Good thing these are only on the screen! :)

There used to be bee hives at the top of our neighbours garden. They would swarm every 4 or 5 years. Once they had 'balled up' on a tree trunk they seemed quite docile. I was always fascinated that if you put your hand close you could feel the warmth coming from them. When they left there was usually the beginnings of wax honeycombs. Usually they were no trouble and found themselve somewhere harmless to nest in the wilds but one year they decided on the chimney of a house down the road, the whole house was a swarm of bees!

I like a few bees as well, but this is scary. Good picture.

Barkfoot Wow that must have been an amazing sight, cool! Youre braver than I am - putting your hand close! But they were quite docile at this point, although I was surrounded by bees as I took pictures, they merely investigated me and then went back to thier usual duties. But I was careful to move slowly so as not to stir them up!

Captain Thank you, and yes! A few too many LOL!