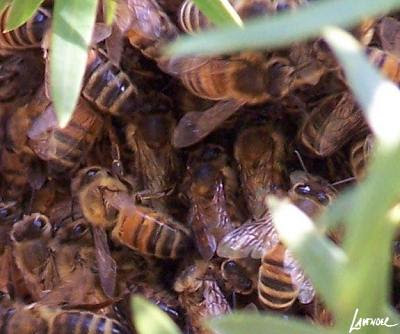 We expected that the next morning there would be stragglers about, (looking for thier now absent Queen), and assumed that they would disperse during the day. Seemed a reasonable assumption anyway.

Long story short: more bees came. And they werent happy. They actually followed me around the garden untill I decided that I could skip garden chores for one day. Getting in and out of the house (without letting in lots of bees) became very tricky. We hoped that the bee keeper who owned the sunglasses (left behind yesterday) would return.

Thankfully he did! We gave him his glasses and pointed out the new swarm. He was perplexed, said this was not normal and asked if we had a box. As he was on his own today, I assisted him by holding the box under the swarm while he shook these bees off the branch and into it.

Neither of us was wearing protective gear, and having seen him stung a number of times yesterday, I was nervous - but I did not get stung. (Considering that they threatened me all day, I thought that was amazing.) It took awhile to get all the bees out of my hair, which was a little wierd.

The box of bees felt incredible! It vibrated softly and made an intense humming sound. After some time, the box was taped shut, placed in the keepers car, and off they went into the sunset.

The siege had ended, Huzzah!
Posted by Lavender at 7:03 AM

So this is strange to have a second swarm in the same spot - but as there was a bit of a language barrier - we couldnt ask him for more info than he had english to give.
Ive another crazy day here today - Im hoping to visit all my blogs at some point today and catch up with you all - Have a great day!

You were VERY brave Lavender BRAVO! I know that horrible feeling of being followed by bees (experienced first time as a child). However, to assist the bee keeper with boxing them is an experience you will never forget and sure you will wear a big smile when re-telling your story (maybe after a few recovery days) Heehee!! I would have loved to experience the humming box, but you have described it so well, I don't feel I need to :) Have a good day!

That's a real experience. How heavy does a box of bees feel?

Oh.my.God. I am SO impressed! There is no freakin' way you would have found me anywhere near a man shaking a branch full of bees! I'm getting itchy and creeped out just thinking about it!
Doesn't stop me from wishing I wasn't such a wimp about stuff like that - or admiring your ability to do it.

Anon Oh Thanks Anon! :) The humming box was very very groovy indeed...Im sure I would not have liked to be chased by bees when I was a child - that might have dampened my enthusiasim for being a bee keepers temporary apprentice!

Barkfoot Cool question Barkfoot! Even with several hundred bees in it - it didnt feel different, weight-wise, at all! Is that BBC Radio 4 Im picking up? LOL!

BetteJo Perhaps you just have a stronger survival instinct than I do, ROFL! I must say I did feel pretty 'buzzed' afterward. (Oh, these terrible puns Im coming up with - sheesh!)
The bees in your hair kinda tickle! :)

Oh my goodness. Anon is right, you were very brave. What an experience! The bees look very scary. I have goosebumps and an shivering just looking at the photo. Ooowwwh!

Hiya Ces! Brave, or stupid hahaha! Maybe a little of both! :)

They certinally are Pips! Pretty amazing creatures, I do admire how they work together. Thanks for stopping by!

While bees are quite amazing creatures, I certainly don't have your courage for being around them! LOL When I was young I had an adverse reaction to bee stings and because of that I am quite ware of them.

Hi Perros, I dont blame you there, always better to be safe than sorry! Thanks for stopping by :)

Good to know that is over with.

Cool story of the bees. I have never seen a swarm like this. In fact, I don't see many honey bees anymore. (Do you have honey bees in the land of OZ?) I have mostly bumble bees and the dreaded carpenter bees, of course.

Hiya Bevson! Yes the honey bee is suppsed to be in decline - which is why we thought wed have no trouble getting a bee keeper to take them - we were surprised finding someone was so difficult..oh well!
Ive never seen a bumble bee here in Oz, so I think we dont have them - and thankfully we dont have the carpenter bees! I love bumble bees tho, they always made me smile, just too cute! LOL