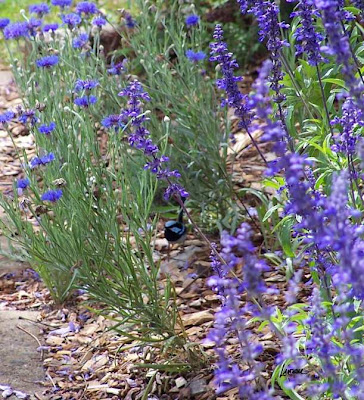 Click the pic for a better view,
this ones easy - cause its Daddy and he's blue!

Mommy & Daddy Superb Fairy Wrens have brought thier chicks to the garden to hunt for insects, lucky me!

HAHA you are VERY lucky Lavender! Photographing them is a real skill though - well done! I can see Dad a lot easier hehhheeee :)

Anon Perhaps this is my next bird to get a good shot of tehehe They are making base in a bottlebrush across the street today - one chick keeps calling and calling - I was worried about it, but after trespassing, its fine. Its Momma came back with a worm for it, and put out the alarm call - suddenly the tree was full of them - but so fast! I think all I have shots of is branches with blurs :)

HAHAHHA well they are the first on my list but I have to HUNT them in far off places. Did get a photograph of a Daddy on Sunday but it was just his bottom (not really bloggable)Hhehheheee. I think you have a greater chance of crossing the Fricken Fairies off your 'photographed list' :)

You know, they were missing from here for a long time - maybe you will get lucky and some will come visit you too - heres hoping!
If they stick around long enough I have a shot at a shot Tehehehe
I might post some other fuzzy shots in the coming days - those blues!!! But will keep hopping out to stalk :)

Wow! Your wrens are totally different to ours. In UK they are tiny tiny wee things camouflage brown. Is everything in Australia so colourful?!!

Barkfoot Its so different, bird-wise, to the north where really colourful birds are the exception to the rule - its a birding paradise!

Captain Tehehe Just what I was hoping for, but this ones the easy one! :)

Oh I would like to step out into the garden and see a beautiful creature like this too!

BetteJo LOL Glad you like it, its even prettier when the sun shines! Ive taken some more pics for you, but no blue sky! Hope theres a sunny day before the Jacarandas done bloomin! :)