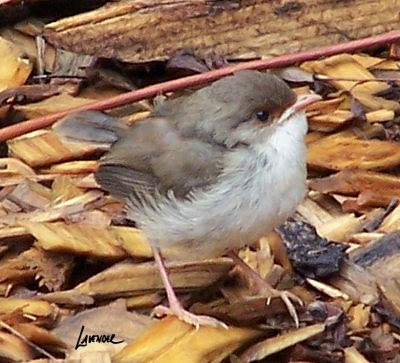 This little one hadnt been out of the nest long when its parents brought it to my garden to begin its hunting lessons. Its siblings were quick learners, but this little chick was not impressed with being turned out of the warm nest.

It spent most of an hour sitting in this spot, calling for its parents to come back from the hunt to feed it. It wasnt untill I was close enough to get this shot that the parents decided they'd given the chick enough 'tough love' for one day.

Momma swooped down to the chicks side with a worm in her beak, while Daddy called urgently from nearby cover. When Momma took off again, still in possession of the worm, the chick was quick to follow.
Posted by Lavender at 12:18 AM

Labels: birds in the backyard

The next day this same chick sat in a tree across the street, calling and calling and calling again. I went to see if it was in trouble. Then the parents returned and gave the alarm call, and suddenly the rest of the troupe showed up - maybe twelve in all. The tree was buzzing with them all giving thier alarm calls and hopping from branch to branch... :)

You must be the blog birdwatching expert!

I love that pic! That chick looks like it's saying - exactly what you said! :) Your interpretation of 'bird speak' is awesome!

*TICK* The whole fricken fairy family have already been crossed off your list Lavender! HAHHHAHHAAAA Excellent photograph ... the best one out of the three (and most difficult to get)!!!!

what a cutie!!! here birdie, birdie. Most excellent Lavender. Keep on shooting.

Captain Im trying to be! LOL But Bird Anonymous is the real deal! :)

BetteJo Thanks BetteJo! I do my best to understand them. Funny thing is, they are similar to people - but much less complicated! LOL

Anon Oh Anon, youre so kind, Thank you! This little one really did carry on like it was in danger, but all it was doing was trying to avoid growing up Tehehehe!

Ces Thank you Ces! Everytime I hear them outside I sneak out with the camera and have a go - breaks up the day nicely too! :)

It should have relaxed in a deckchair.

He's so fluffy! I've come over all silly and just want to scoop him up and give him a cuddle.

Catherine LOL I wanted to do that as well! It was hard to resist too the way he called and called, Tehehehe, so it wasnt just me being a softie, Thanks Catherine! :)

Well done for getting such a special photo and what a sweet little wren - an absolute beauty!

Thank you A Kite Rises. I loved the Swan pics on your blog, nice shots!

What a cutie patootie. I love sharing your birds.

Catnapping LOL This little fluff ball does that to alot of us :) such a little cutie!