I have never had an animal so wholeheartedly refuse me. He would arrive in the early evening, and give me a look of utter disdain. I would present my offerings - dry and tinned foods with fresh water - and retreat inside the house. Only then would he gorge himself. After, he would have a bath, a bit of a nap in the sun, then again disappear untill the following evening.

It took six long weeks of these slow, careful steps till I had earned enough trust to sit within three feet of him while he eats. It was on one such occasion that I snapped this picture of him. He was so curious about the sounds coming from the camera, that he let his guard down. It was the first time I got to see his face without a malevolent expression. 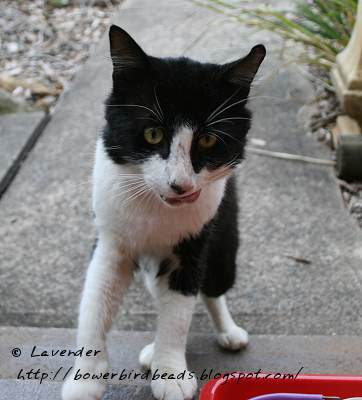 Since then we began to find him in the garden on random mornings, and I have taken to giving him a nice breakfast if I find him there. We have a strange schedule in our house, so if Iam unable to check for him before 10am, he is never here. We hope he has another appointment with another crazy cat person somewhere nearby. Yet other days, he spends the whole day in my garden.

Some mornings after his breakfast we see him up the top of the street heading around the corner. On those days he is never back for dinner. Trying to follow him has been fruitless.
Posted by Lavender at 10:32 AM

I love the fact that cats are so independant and indifferent. It makes it all the more rewarding when they finally accept you as a friend.

It's sad because most likely one day he won't show up and you'll never know what happened. Poor kitty, doesn't know how good he could have it!

I love when strays show up to eat! That hasn't happened for awhile but I bet you become great friends.

Got to be a cat.... get yourself a dog and see and feel the difference!