I think what brings cats into my garden is, firstly, an absence of dogs. Followed closely by an abundance of birds. Add a drought sparse shrubbery and any cat can find a perfect spot to either bake in or escape the sun...and if one is really lucky, lunch will just land beside you! Gotta love the service in a place like that. 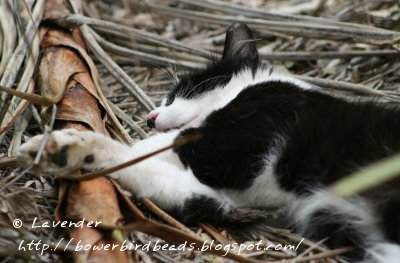 By the end of March, as you can see, he is comfortable with me being around him. Although that only lasts untill about the three foot mark - then he will retreat. To the three foot mark. Must just be his personal space requirement. 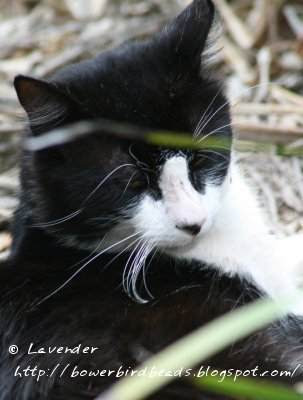 He will allow me to sit with him while he eats. I talk softly to him in an attempt to gain more trust. One day I asked him "When are you going to let me pet you? Ive got to get you socialized so you can have chance at a real home." While licking his whiskers, he looked up momentarily, I had the impression he was doing the cat equivalent of rolling his eyes.

Pressing the issue I continued, saying "Look, I know what its like out on the streets. It was a long time ago, but I remember like yesterday! The never being at ease, danger everywhere, long, long, neverending nights, sleeping in the day when its safer - and winter! How cold is winter? Dont you want to come in from the cold?"

He may have stuck his nose deeper into his dish, but he continued eating, and then I remembered something about my street days.

Under my breath I said "Of course, there is a sort of...freedom."

And I kid you not. He raised his head. He looked me right in the eye.

I felt his answer. 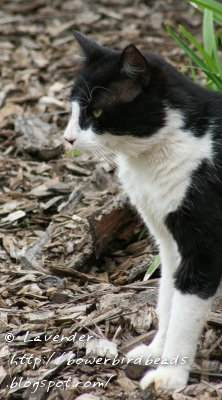 And as he walked away up the path, I realized why I care so much for this feral cat. We are kindred spirits in our way. Both a bit too damaged to ever really come in from the cold. Both doing our best living on the fringe of 'society', consumed entirely with the business of just getting through each day.
Posted by Lavender at 2:30 PM

my dear lavender, never have i wished to have coffee or tea with you as much as after reading this post. we would understand and be comfortable with one another. i am sure of that. all three of us.

I LOVE this true story. And it involves a cat.. :) The cat may decide to let you pet him one day. But HE will have that choice... After all, he knows that YOU are on HIS territory.... :)Meow!

I am enjoying your experience with your feline friend very much and can see why you have formed such a bond. waiting anticipatingly(lol is that a word) to see if you ever break the 3 foot barrier.

I'm sure with all your patience and gentleness (and food) you will win him over more. He may never be totally tamed, but I think you will make a friend of him. When he makes eye contact, try blinking at him, slower than you usually would. I've heard it's a signal that you are at ease and trusting, maybe he will do it back. :)