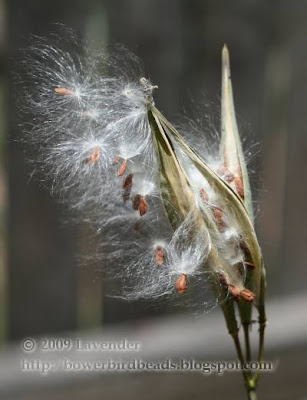 Ok, Ok, alright, I confess. Yesterday's blog post was a ruse. A stratagem. Some might say an artifice. Even other others: a feint. Whatever you call it, it was a deliberate attempt to delude you all into thinking that that was a fresh photo.

Why should I worry? Ive made no 'Phresh Photo Pledge' or such (yet).

I dont know, I dont know! Perhaps I am just Demented with the Power of Plausibility? After all, how would you know if I was lying to you?

So now that you are cooking me over an open flame to distill the essence of truth: yesterdays shot was taken on December 21st. Todays shot was taken on January 11th...but the plant is still setting seed pods and opening them as well. Ive collected a bunch of seed, and let some free to do thier thing in a bare patch nearby.

I wasnt feeling too crash hot yesterday, so I pulled a swift one on you, and then when I wasnt feeling at all better today, I realized that the jig was up and I still needed a post for today, and since I was feeling like crap on a clamshell, I just wasnt terribly inspired, so I looked at hundreds of photos waiting to be shared, and this one is the only one that speaks to me, my word, thats saying alot, there are other road trips to cover, and dont ask about the macro lens project....

Lavender has a toothache and is not reacting well to a related prescription. She will be her old blogging self again in a few days. Posts may or may not appear during this time, but if they do, she may appear taciturn in an effort to not appear surly, or insane.
Posted by Lavender at 5:00 AM

Oh Lavender, I'm sorry you are with a toothache. This is the most terrible pain I know. Had toothache myself last weekend had to take antibiotics and could not sleep during 2 nights. It was so bad. Well, now I'm gonna have a wisdom tooth extraction :-S... Hope it is over for you soon.
However, your blog post today is such a beautiful picture, cant't look at it enough. It catches the movement of the seeds in the wind so well. Almost magical. Bravissimo Lavender! And get well soon!

argh toothache. I thoroughly empathise and sympathise.
As for being tricky, I saw the photo before I read so I didnt miss out on the OH WOW feeling. If something appears that way then it is, even if it isnt:) That sentence always makes sense to me until I say it out loud.
Genuinely wishing you dental wellness and soon.

It was my childhood game to blast these seed and blow the seed with wind blow. I really enjoyed it very much.