Op-Ed: They call it "Redevelopment" 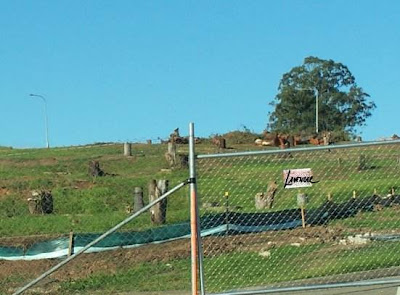 In the 1970's: they herded all the disadvanted people out of Sydney and into "superlot" public housing estates in the western suburbs.

Beginning in 2005: Theyre kicking them all out. Bulldozing thier homes. 'Re-assigning' them to 'other areas'.

May 2007: Theyve killed all the trees in this superlot. Apparently, it wasnt enough to up-root all the people.

Hasnt the ALP heard about global warming? How many more hundreds of thousands of dollars can they make by killing the trees too? Is there no end to thier greed?

DISCLAIMER:
Im not omnipotent. These thoughts are only my opinion.
Posted by Lavender at 10:05 AM

Many bloggers, including WW participants, will be flying Peace Globes in the blogosphere on Wednesday, June 6, 2007. It is BlogBlast for Peace day - the second annual event. Please consider using your Wordless Wednesday platforms on this day to participate. You can find more information about the movement at Mimi Writes or BlogBlast for Peace
http://mimiwrites.blogspot.com or http://mimilenox.blogspot.com

Thanks and peace!
Mimi