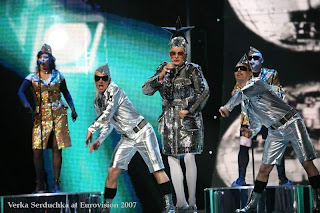 The semi finals were broadcast on saturday nite, and my three picks were:

Israel: Teapacks' "Push the Button" Political? Yes! But so pleasantly put. Refreshing and upbeat without loosing its heavier meaning.

But of course, none of these made it to the finals. Major Bummer.

Sunday nite brought the finals. A total of 24 performances, and the only one I could barrack for was:
Ukraine: Verka Serduchka's "Dancing Lasha Tumbai"
Talk about upbeat, toe tapping, cheerful and just generally good fun - I was sure I was onto a winner.

Well, almost. Early in the voting it looked like Serduchka was going to take home the honours. I was on the edge of my seat as the votes came in one country at a time, cheering when a good score came in and hurling invectives when a low score arrived. You cant help but get involved. Youve just sat through hours of mostly predictable, derivative, painful elevator muzak and you really want to see the one you liked rise to the top.

But 'twas not to be this year. Late in the voting Serbia: Marija Serifovic's "Molitva" pulled ahead and stayed there. My optimisim slunk away. The Ukraine did keep its #2 spot.

So, what have I got to say about Serbia's winning entry? Meh, a perfectly servicable song. Im just really sick to the back teeth with all things 'hyper-emotional'. (Yes, I realize it would be nicer to just say that it just didnt float my boat.)

Now if you like Eurovision as much for the really terrible entries, (and who doesnt?), allow me to share my two picks for the most tragic of the event:

United Kingdom: Scooch's "Flying the Flag (For You)" Britian has my sincerest sympathy. 'Nuff said.

Switzerland: DJ Bobo doing "Vampires are alive" (and the video is better than the performance!) Im pretty sure real vampires are more 'confrontational' than 'Top 40'.

All in all, it was a lot more satisfying last year when my pick ended up as the winner,Finlands' Lordii doing "Hard Rock Hallelujah". If you missed it, youve got to click this! LOL

DISCLAIMER:
Im not omnipotent. These thoughts are only my opinion.
Posted by Lavender at 1:02 PM

thanks for liking the Belgian participant :)...we never get through the semi finals though lately. tough luck , huh.

My pleasure Goofball - I thought they had a good chance with that groovy tune! Hope to hear more from them - and best of luck to Belgium next year! Cheers.