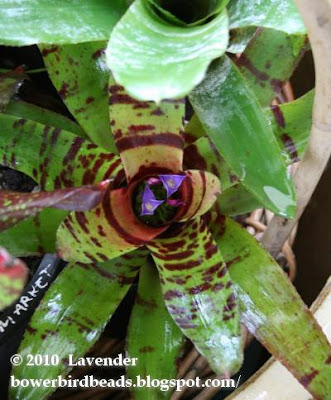 Orchids are a wonderful group of plants to grow, but you spend a large part of the year tending plants that appear happy to do stuff all for you. I thought it would be nice to have some colour going when the orchids were not in bloom...but what could be happy in the same environment? 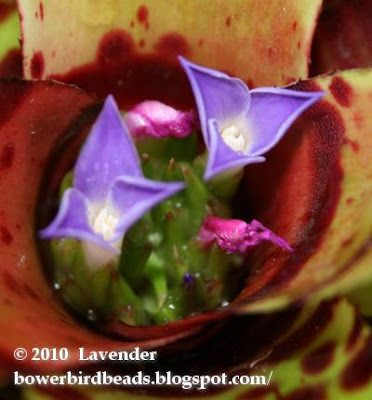 And so it came to pass that I acquired some Bromeliad 'pups'. It was very difficult to choose which to try because the variety and colours are staggering! Quickly I realized that a new addiction could be in the making, and have learned not to even open the emails and catalogs that come along anymore - its just too much temptation.

This is my Neoregelia "Blushing Tiger". Ive only had it a few months and already its bloomed for me - what a charming envoy for its species - but I must not cave in! I must not order more plants...till at least next year.
Posted by Lavender at 11:56 AM

Nice! Nothing from my orchids.... yet.

I have one plant. Indoors. And no plants other than the usual grass and bushes. The plant inside is an orchid. I haven't killed it yet and for some reason my cats aren't interested! Never heard of Bromeliad pups!

Dropping by to wish ya a Happy New Year!

What lovely plants! My senior mom and I love unique and interesting gardening projects. She'd love to see these. Thanks for sharing the pictures. :)