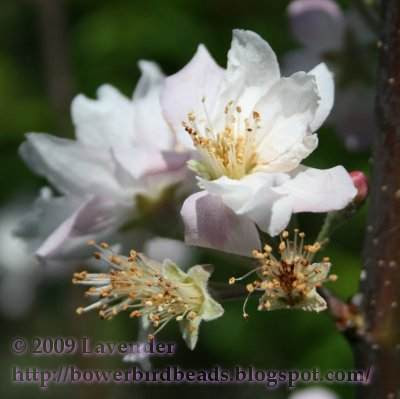 Apple blossoms are over for the season, and the trees have begun to leaf out. But I had this photo waiting to share - so - this was my chance. I thought we might catch up in the garden a bit before we motor off on another road trip, cool?

Heads Up:
The image is sporting my new id tag. Ive tried to figure out where things stand on the whole Orphan Works thing, and my eyes just glaze over. Which is kinda good, because I have the feeling that if I could read the whole thing, that my blood would boil and I would die of Terminal Aggravation. Suffice it to say: just because I share a picture and/or words here, doesnt mean that they then belong to everyone. What has the world come to?

Of Note:
Posting may get patchy during key periods during December, hopefully everyone else out there in blogland is in the same sort of situation, and therefore understands. Personally, I hate the whole christmas thing, but fighting it hasnt won me any awards or popularity contests. Such is life.
Posted by Lavender at 8:02 AM

My only complaint is that it always creeps up so quickly these days!!

Anyway hope you have a great harvest. Was reading about the barter exchanges, my chillies for your apples?

Looking forward to April when you can take pictures like this over here again. At the moment there are neither leaves nor blossoms nor apples. Great you'll put the gardening series! Looking forward to it.
As for Christmas... we eat ginger bread since October and we love it - LOL! At least one good thing about wintertime!

I hate christmas with a passion but do it for my 4 kids and my husband who still cant fathom that aussies look forward to bumming in the sun at xmas, now snow :)

BetteJo Indeed it does, and its downright spooky that way LOL

Young Werther Oh chillies! Good idea! Unfortunately, the Lorikeets will get to them before we will - and the real kick in the pants is - the leaves of the tree will hide them while they raid me - so I cant even get a decent picture - rascals!

Areeiro I LOVE gingerbread and pfernusse (I know Ive spelled that badly, but bet you know what I mean LOL) It has taken me ages to get used to winter here in Sydney, I so miss snow and that beautiful quiet it brings...plus spring is all the more glorious for having survived the deep dark cold - hang in there!

Melanie Please tell your husband I hear him! I feel much the same way, and its very hard to get into the 'spirit' when it is entirely the wrong time of year LOL LOL Oh well, this is the dark side of migration, there are some things you never really get used to - but anyway....Heres hoping your kids make the whole thing worthwhile for you, We wish you some quality family time!

perhaps we can lament the holidays together, in spirit or words...

KJ I could use more like minded folk to hang out with...even if it is only in spirit! Hugs KJ!