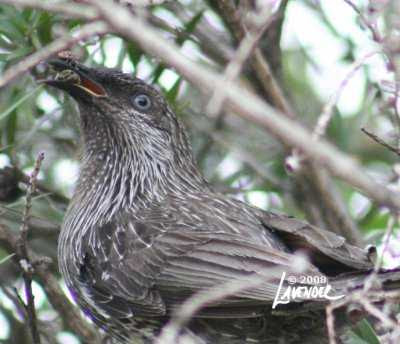 Oh well, I missed the second fledgling despite a valiant effort. Such is life, eh?

Although both chicks are out of the nest, the parent birds are not off the hook yet! For the next couple weeks, the parents will continue to feed the chicks while they are learning how to care for themselves.

But the first lessons are in flying proficiency. So the parents gather insects in thier usual manner, park themselves in a nearby tree and begin to call a chick to them.

I rarely see the chicks at this stage, they tend to stick to dense cover untill they are confident little fighter planes. Then they so closely resemble thier parents, we wont know who is who anymore.
Posted by Lavender at 9:43 AM

BetteJo QUOCK! I do too - its very expressive really - and enigmatic - can mean anything! Teeheehee