I can haz cricket? 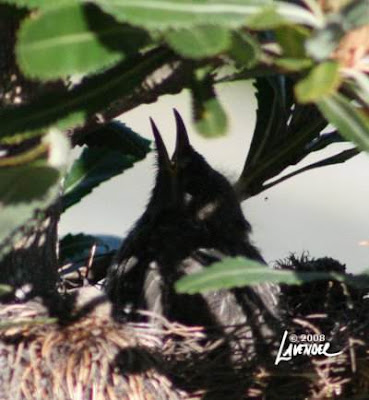 For hours Id heard Momma & Poppa Little Wattle Bird making thier "QUOCK!" call. One "QUOCK!" doesnt tell you a whole lot. In fact, it could mean anything. "QUOCK!"

But when it goes on and on and on and on, well, "QUOCK!" this birder's curiousity gets impossible to ignore. Plus, I know they have chicks nearly ready to fledge. My bet was "QUOCK!" the parents are calling the eldest out of the nest. So I got the camera and slipped out in "Max Stealth Mode" to observe. "QUOCK!"

Just as I rounded the sunshade/bird-hide, the elder chick lauched itself out of the nest and into flight! It flew like it was already a pro, straight and true to the neighbors apple tree, maybe 10 metres away. It was over before I could even get a focus on the little Champion!
And then there was one. "QUOCK!"
Posted by Lavender at 10:50 AM

This is a much better incident that the one last year where the little fledgling fell to the ground and was saved by one two-legged being :)

Ahh yes , the picture that nearly was but wasnt. You shall have to set up video survellance next time (nest cam) so you can monitor it at all times and never miss the shot.

seeing this first flight must have been awesome!

I've never seen a first flight as far as I know, quock!

BetteJo QUOCK! Thats as close as I can spell it anyway - they have other calls as well - including thier morning song, which sounds like a VW that cant quite start!

Melanie Oh Ive thought about it, to be sure! Id love to put one up in the aviary too...maybe I could out it on the christmas list :)

Sandy QUOCK! Keep your eyes (and ears!) open - still plenty of birds to fledge this spring (although it sounds like today will be very summery, egads!)