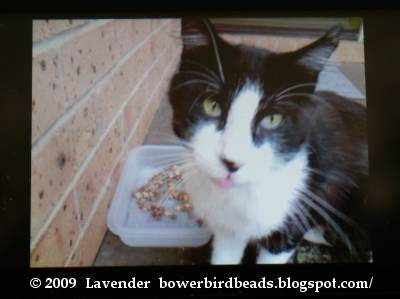 Long time readers will remember that Bonne Chance first arrived on my patch last January. He was completely feral, and I could not bring myself to take him into the local animal pound as they would have immediately euthanized him. Who was I to decide who should live or die? It certainly wasn't his fault that he was living rough.

With time he began to trust me. Sadly, no matter how well we got on, my two housecats could find no room in their hearts to share me. Bonne Chance would have to remain an outdoor cat until he was socialized enough to have a chance at being re-homed.

But he kept getting sick. And on tuesday the 22nd, his condition suggested that even if he could pull through, that there was likely an infectious element. I had no choice but to try to bring him in to the professionals.

Once at the shelter, disaster. Inside, the office staff was being rude to me, while outside, a man assigned to do a preliminary check on Bonne Chance made what was later described as "...an honest mistake...".

He opened the cat carrier, while he was still outside.

Bonne Chance did what any self respecting cat would do. He took off like a shot, and disappeared into the distance. I had brought him to his doom.

Yes, I did give the staff a big serve. And then I walked the grounds searching for him, before returning to the office to have another go. I was devastated. The point of this whole - nearly a year long - exercise was to HELP him, not make things exponentially WORSE.

I tried to come to terms with it, tried to convince myself it wasn't really my fault. But it was. It just was. He would have been far better off dying a long slow death in his own territory, than essentially dumped in the unknown.

I went back each day and called and searched. I prayed to "If There Are Any Cat Gods Out There", I cried and then went back and looked again. When they were closed I stood at the gates and called. I could not assuage my guilt.

Its seven and a half kilometers from here to the pound, and nearly all of that is over major roads, a rail line and industrial estates. I hoped he would just show up back here at home, but I didn't fancy my chances much.

But today he did! He just walked up the path like any other day, until he saw me in the window...then he meowed and ran the rest of the way. We are very happy to be reunited, and he appears to be none the worse for wear!

He is my cat now. Wonder if I will be able to get him in a box again for his vet appointment, (snip and chip, LOL!)
Posted by Lavender at 5:11 PM

Lavender! I've missed you! I can just imagine the heartbreak when Bonne Chance was let out so far from home. I would have been devastated too. But he came home. That is indeed, a miracle.

It's clear that he doesn't blame you for his little misadventure, and is probably releived that you managed to escape from the vets too!
Better luck next time...

I would have been devastated too. But he came home. That is indeed, a miracle.

Welcome back girl!
what a wonderful ending.

got to love a good miracle :)

What a lovely ending to your story.

We also were adopted by a stray cat on 23 October. We call her 'Trouble', much to the amusement of the vet surgeon administrator. She was 1200g when we found her crying under one of our conifer trees. Ten weeks later, she now weighs 3000g and loves to play in the snow.

Our current problem is that she does not know the difference between climbing the conifer trees outside and the single conifer that we have inside our home with lights on and a fairy on the top!

Really it is not lees than a miracle...God bless her!!
Wedding invitations

It's so nice to have such compassionate people as yourself you are so deserving of all Gods blessings.

My sister lives in a farming community and people drop off unwanted cats all the time...some go quite feral if they survive. She tries to capture them...as the vets in this country all spay and neuter them for free and then return them to the wild. Or.. farm country... She feeds the ones she sees and knows...and some actually do seem to become friendly enough to keep.... she has one little black guy that totally disappears if any stranger but me is in the house... I think he thinks I am her... and he only shows up again when they are gone. Even if it is days or a week later.

Yesterday she sent a pic of the latest cat...friendly...they she and some neighbour found...It is a beautiful Abyssinian !