Yesterday I was unexpectedly press ganged into going to the footy game. Im not big on watching it, primarily due to Rugby League making no sense to me whatsoever. Give me good old American Grid-Iron anyday! But I grant you this: it is a whole lot more exciting watching from the sidelines with your team winning big (Parramatta 68, Brisbane 22).

Something I do admire about rugby is, the players wear little protective equipment. This means that tackles are less like bone crunching collisions, and more like pure brawn wrestling. The fitness level of these guys! Whoa! 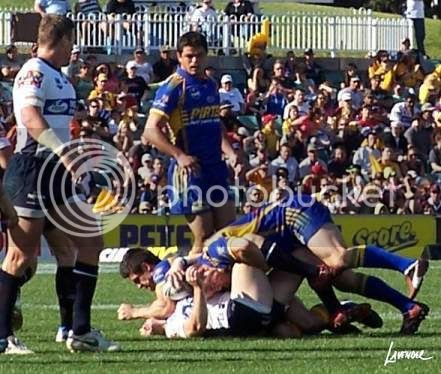 Incidentally, the city of Parramatta sits on the banks of the Parramatta river. Loosely translated from the original Aboriginal name for this region, Parramatta means "where the eels are". Thus the team's name. And Mascot! 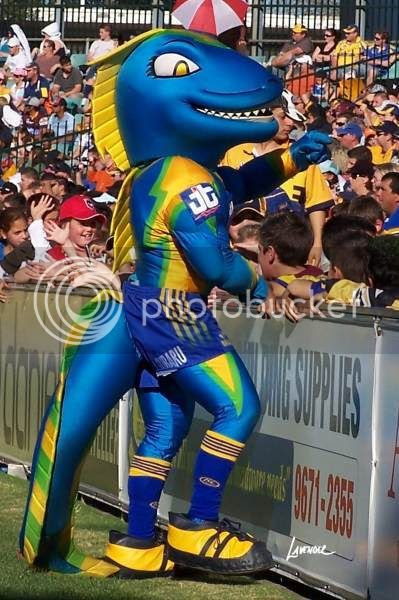 Sparky the Eel ought to win an award of some kind. Ive done this sort of work myself, so I know how physically demanding it is just lugging the suit around. But he was fantastic with the crowd, and never quit being highly entertaining.

In addition to all the sideline antics one hopes for in a mascot, he also patiently held babies for photos, shook hands with every kid in the stadium, and most importantly, flirted heavily with me!
Posted by Lavender at 9:40 AM

Labels: Australia, OTR (on the road)

The Most DH wasnt jealous at all of Sparky flirting with me, I cant imagine why!
Have a fun day everyone!

Hey Lavender, I love Mascot. Such vibrant colours. I would have flirted with the mascot myself ... LOL!

HAHAHHAAA, I'm runnig away very quickly because don't like sports, even from the sideline! WHAT suit did you lug around Lavender? A Koala? Do tell!

I wouldn't have a single clue as to what rugby involves, but I imagine any of those sporting events is exciting close up!

Nick LOL! I wouldve paid to see that Nick! But Sparky really was very charismatic, I doubt many could resist him!

Anon Well, seeing it live does beat seeing it on tele, youll have to trust me on that tehehe But really, sports on TV wouldnt be so bad, if there wasnt SO MUCH of it!
Lets see, work Ive done - cant remember them all but some of the hottest sweatiest costumed work Ive done included a christmas tree, a tooth, and a bacteria - the bacteria one was the most fun to do as it leant itself well to sneaking up on people and other cheeky antics - and also the worst as it was made entirely of ripstop nylon and had lots of long bits that kids LOVED to pull on - little blighters!!! Hehehe

Bettejo I almost hate to admitt it, but I had a pretty good time! Much better than watching it on tv! My hubby has tried to explain it to me many times, but I still just dont get it LOL!

You are an EXPERT at being ummm errr stuffed entities Lavender!

RDRDRDR Aye, that am I Mate!

(I think it might be time for this little black duck to go to sleep!)

I could care less for sports on tv but the photo of these men got me all very excited!!! I would go just to see the legs. Now does that make me a sexist?

Oh and another thing. The American football players are all padded and covered so can't really tell. These men look better with those extremeties!

I like the mascot. BUT he seems pity on wearing those heavy stuffs..

CesIf that makes you a sexist then Im one too! (((Blush)))) I too appreciate the legs, especially the thighs, so suggestive of power..oh dear, Id better leave it there - tehehehe

Meditation & Keeyit Sparky the Eel was so funny, very entertaining, and its not easy to show your personality through a suit like that - what a pro!
Thanks for visiting!